Another day of funerals as Pittsburgh mourns synagogue shooting victims 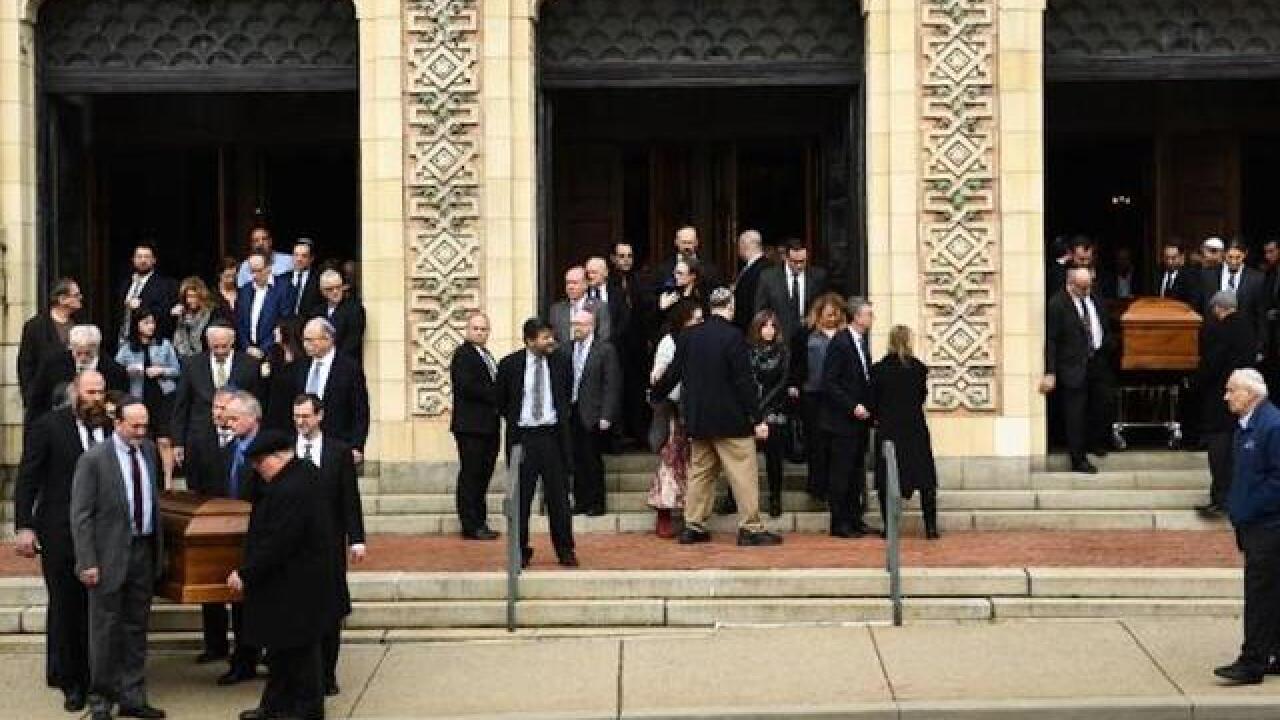 Image copyright 2018 Getty Images. All rights reserved. This material may not be published, broadcast, rewritten, or redistributed.
BRENDAN SMIALOWSKI
<p>Caskets are carried outside the Rodef Shalom Congregation where the funeral for Tree of Life Congregation mass shooting victims Cecil Rosenthal and David Rosenthal who are brothers will be held October 30, 2018 in Pittsburgh, Pennsylvania. (Photo by Brendan Smialowski / AFP) (Photo credit should read BRENDAN SMIALOWSKI/AFP/Getty Images)</p>

A grief-stricken Pittsburgh community will have another day of funerals for victims of a synagogue shooting -- even as it struggles to comfort those affected by the massacre.

In yet another day of anguish for the close-knit community, mourners will gather Wednesday to bury some of the 11 people killed when a gunman stormed the Tree of Life Synagogue on Saturday.

Crowds packed funerals Tuesday, with long lines snaking through streets and busloads of people coming from synagogues nationwide. Pedestrians quietly watched as motorcades and hearses passed by, followed on foot by mourners dressed in black . Others held hands and wept.

At least three people have been laid to rest in public funerals this week: Brothers David and Cecil Rosenthal, and Dr. Jerry Rabinowitz. Additional funerals are planned Wednesday and Thursday.

Those killed were between ages 54 to 97.

Despite protests, funerals focus on victims

The community united in grief to mourn the victims of the deadliest attack against Jews in US history, but was divided over a visit by President Donald Trump.

Trump came to Pittsburgh to pay his respects Tuesday despite a request by some local leaders to stay away until all the dead are buried.

But as protesters condemned the visit, mourners attending the funerals focused on those killed.

The Rosenthal brothers were fans of the Pittsburgh Steelers football team, and about 100 players and staff members paid their respects at the Rodef Shalom Congregation.

Relatives shared stories of how much the brothers loved their synagogue and spending time at the Jewish Community Center.

Rabinowitz, the doctor, was remembered as caring. He became known in Pittsburgh as the "one to go to" for HIV care because he treated everyone with dignity and respect, former patient Michael Kerr said. His patients are among the countless people grieving his death.

"Anything you wanted done, Jerry was there to do it. (He) always helped out," said Jean Clickner, who knew Rabinowitz for decades.

Trump was accompanied to Tree of Life synagogue by Melania Trump, Ivanka Trump, Jared Kushner and Treasury Secretary Steven Mnuchin. The President and the first lady lit a candle inside the vestibule for the 11 victims.

Outside, the Trumps participated in the Jewish custom of placing stones and roses for the dead.

Some neighbors in the close-knit community of Squirrel Hill protested the visit and held signs saying, "Words Matter," "Strength through Unity," "Watch Your Words," and "Hate does not work in our Neighborhoods."

But not everyone was against the President's visit.

Rabbi Jeffrey Myers, who was leading a service at Tree of Life when the shooting began, said the President is welcome. He greeted the President and first lady at the synagogue, and shared with them details of the horrific attack.

The Trumps also visited with wounded police officers at the hospital, the widow of one of the victims and others.

The shooting has struck at the heart of Pittsburgh's historically Jewish Squirrel Hill neighborhood and reverberated across the nation.

Myers said his congregants would be unbowed.

"We are Tree of Life and, as I said before to many, you can cut off some of the branches from our tree, but Tree of Life has been in Pittsburgh for 154 years. We're not going anywhere," he said on CNN's "New Day." "We will be back stronger and better than ever."

An online fundraiser for those directly affected by the massacre had raised nearly $930,000 by early Wednesday.

Outreach efforts extended to first responders. Those injured in the shooting include police officers -- two of whom remain hospitalized. The walls of the Zone 4 police station, a few blocks from the synagogue, were lined with handwritten notes from residents after the shooting. Crowds gathered outside the precinct and chanted, "thank you, thank you."

Muslim communities also raised more than $180,000 in three days for the shooting victims.

Suspect Robert Bowers faces 29 federal charges, including counts of hate crimes that are potentially punishable by death. He made his first court appearance Monday.

Bowers was detained without bond and his next court date is Thursday. The US attorney in Pittsburgh has started the process of seeking the death penalty and the state plans to file its own charges later.

Pennsylvania Attorney General Josh Shapiro said his office is looking into whether Bowers and others used social media platform Gab to incite violence based on evidence that the suspect posted anti-Semitic comments on the site.

Andrew Torba, the CEO of Gab, defended the site. In an interview with CNN affiliate WBRE, he said he's "horrified" the suspect used his site, but said "there are bad people in the world, and they are on every social network."

During the interview, he wore a hat that said, "Make Speech Free Again."