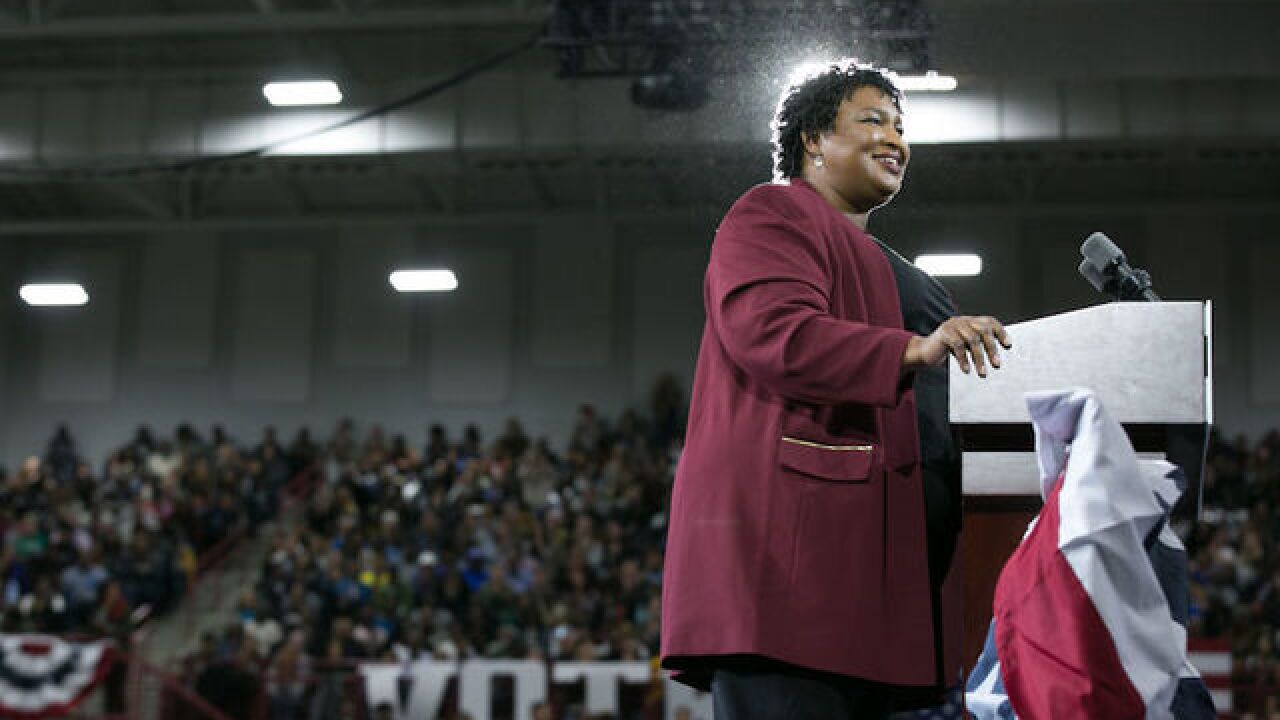 Image copyright 2018 Getty Images. All rights reserved. This material may not be published, broadcast, rewritten, or redistributed.
Jessica McGowan
<p>Georgia Democratic Gubernatorial candidate Stacey Abrams gives a speech to the crowd gathered at Morehouse College for a campaign rally with Former US President Barack Obama on November 2, 2018 in Atlanta, Georgia. Obama spoke in Atlanta to endorse Abrams and encourage Georgians to vote. </p>

The word "first" is probably going to come up a lot on Tuesday.

The House of Representatives is expected to see its first female Native American member. One way or another, Arizona will elect its first female senator. And Nevada might become the first state to have a Legislature made up of a majority of women.

PHOTOS: Voter turnout around the nation

Below is a list of some of the most prominent firsts that could happen this fall:

A trio of Democratic gubernatorial candidates are each vying to be the first black person to take the governor's mansion in their respective states.

Tallahassee Mayor Andrew Gillum is facing off against former GOP Rep. Ron DeSantis in Florida, and if Gillum wins, he would be the state's first black governor.

Former NAACP leader Ben Jealous is mounting a bid to unseat Maryland GOP Gov. Larry Hogan. If Jealous pulls off an upset to defeat Hogan, he would become that state's first African-American governor.

Oregon Democratic Gov. Kate Brown, who identifies as bisexual, is already the first openly LGBT person to be elected governor. Former New Jersey Gov. Jim McGreevy came out as gay before he stepped down from office in the early 2000s. That in mind, a few races elsewhere could lead to firsts of their own.

Over in Colorado, Democratic Rep. Jared Polis would become the nation's first openly gay man to be elected as governor.

Elsewhere this cycle, Vermont Democrat Christine Hallquist has already made history as the first major-party transgender nominee for governor, and if she wins, she would be the nation's first transgender governor and one of the very few transgender officeholders around the country.

A few hard-fought and closely watched races in traditionally red states are poised to increase female representation in the Senate.

Further down the ballot, candidates across the map are poised to be the first of their backgrounds to join the House of Representatives.

Sharice Davids, a Kansas Democrat, and New Mexico's Deb Haaland would be the first Native American women elected to Congress. Davids is a member of the Ho-Chunk tribe, and Haaland is an enrolled member of the Pueblo of Laguna, according to their respective campaigns.

Michigan Democrat Rashida Tlaib and Minnesota Democrat Ilhan Omar would be the nation's first Muslim women in Congress. Tlaib is the daughter of Palestinian immigrants and essentially secured the seat by winning the Democratic primary earlier this year. Omar also would become the first Somali-American member of Congress.

Texas Democrat Gina Ortiz Jones would be the first Filipina-American in Congress, and California Republican Young Kim would be the chamber's first female Korean-American.

Democratic congressional nominee Alexandria Ocasio-Cortez, who already shocked the political world by defeating Rep. Joe Crowley in the party's primary this summer, is expected to be the youngest woman ever to be a member of Congress, having just turned 29.