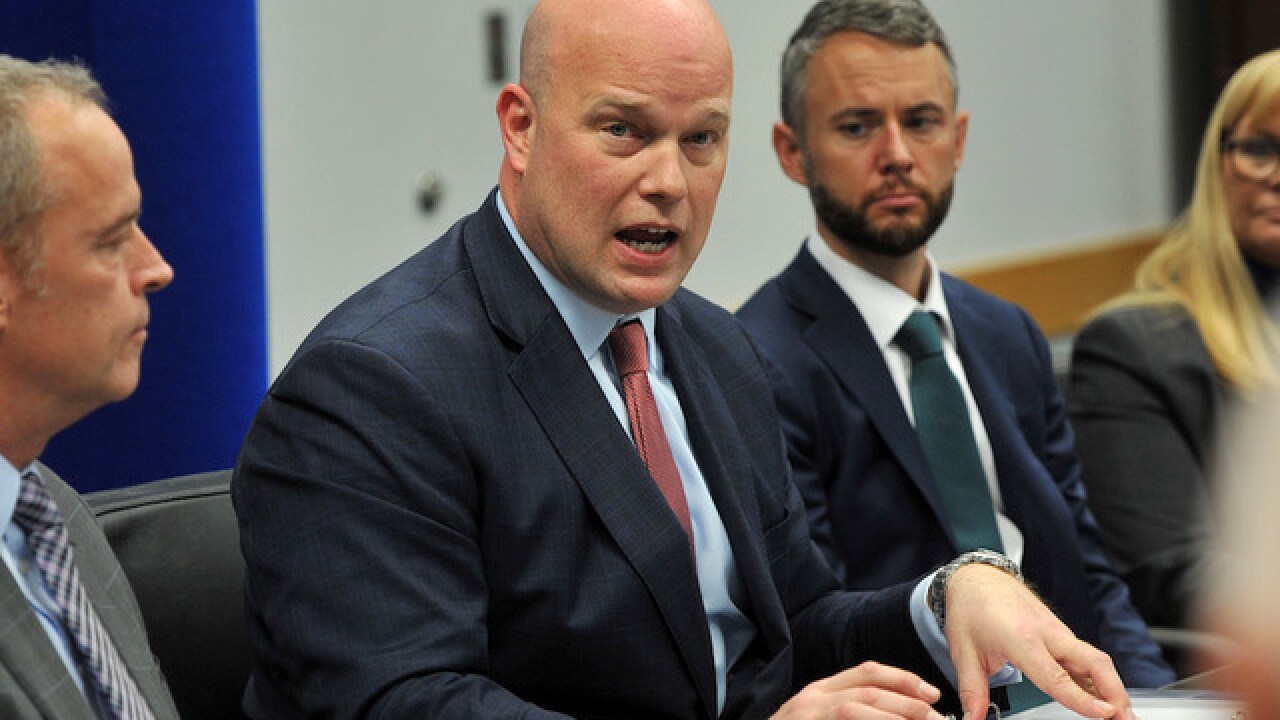 Image copyright 2018 Getty Images. All rights reserved. This material may not be published, broadcast, rewritten, or redistributed.
Steve Pope
<p>Acting Attorney General Matthew G. Whitaker, gives brief remarks to state and local law enforcement on efforts to combat violent crime and the opioid crisis at the U.S. Courthouse Annex, on November 14, 2018 in Des Moines, Iowa. Whitaker was appointed as acting attorney general after previous attorney general Jeff Sessions was forced out out of the job. </p>

Three Democratic senators on Monday filed a lawsuit challenging the appointment of acting Attorney General Matt Whitaker, ratcheting up the court effort to declare his placement atop the Justice Department as unconstitutional.

Sens. Richard Blumenthal of Connecticut, Sheldon Whitehouse of Rhode Island and Mazie Hirono of Hawaii filed the suit in US District Court on Monday, represented by the progressive public interest groups Protect Democracy and the Constitutional Accountability Center.

"The stakes are too high to allow the president to install an unconfirmed lackey to lead the Department of Justice — a lackey whose stated purpose, apparently, is undermining a major investigation into the president," Whitehouse said in a statement.

The lawsuit is only the latest challenge to Whitaker's appointment to replace Jeff Sessions after President Donald Trump fired his attorney general the day after the election.

Whitaker has come under fire from Democrats and others because he was a vocal critic of special counsel Robert Mueller's investigation before joining the Justice Department.

He was serving as Sessions' chief of staff before Sessions was ousted, and has not gone through the Senate confirmation process in that role. His appointment leap-frogged Deputy Attorney General Rod Rosenstein, which also gave Whitaker control over the Mueller investigation that had previously been supervised by Rosenstein.

Democrats had previously urged Whitaker to recuse himself from supervising the Mueller investigation, in addition to questioning the constitutionality of his appointment.

Last week, the Justice Department issued a memo defending Whitaker's appointment, concluding that it was legally justified under the Vacancies Reform Act because it's a temporary appointment and "he had been serving in the Department of Justice at a sufficiently senior pay level for over a year."

The Senate Democrats' lawsuit, however, argues that his appointment is unconstitutional under the Constitution's Appointments Clause requiring Senate confirmation of high-level federal appointees.

Whitaker has also come under scrutiny from House Democrats, who will take control of the chamber in January. Four expected committee chairmen sent letters to Whitaker and others asking for information about Whitaker's involvement in a company shuttered by the Federal Trade Commission, declaring they plan to investigate the matter next year.

Trump said in an interview on "Fox News Sunday" that "it's going to be up to him" when asked if he would accept attempts by Whitaker to curtail the Mueller investigation.