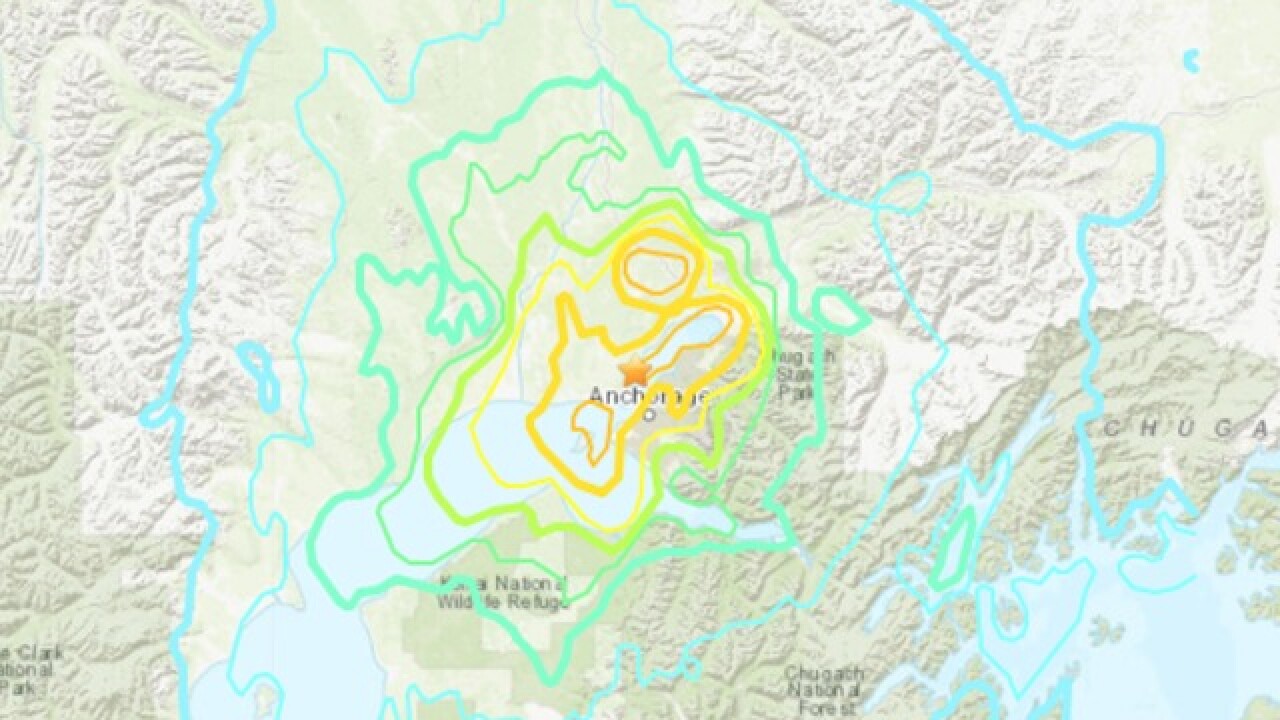 Social media images depicted scenes of chaos, including students taking shelter under desks while sending texts from their phones, roads that had been buckled, items tumbling from grocery store shelves, hospital workers scrambling for cover and shards of broken glass outside buildings.

There were no reports of fatalities or injuries so far.

The US Geological Survey has reported at least eight aftershocks following the first quake. The largest, registering 5.7, was located in the city of Anchorage.

The Anchorage Office of Emergency Management urged residents to shelter in place.

"I could tell this was bigger than anything I'd been in before, and it wasn't going to stop," resident Philip Peterson said.

Peterson was in a multistory building in downtown Anchorage as the structure swayed and coffee mugs fells from tables and tiles from the ceiling.

"I just jumped under my desk and had to ride it out," Peterson said.

Michael West, the Alaska state seismologist, told CNN the 7.0 earthquake was felt up to 400 miles outside of Anchorage. West said damage reports across the region are just now beginning to arrive at the Alaska Earthquake Information Center.

The White House said via Twitter that President Donald Trump, who is in Argentina, had been briefed on the disaster.

Former Alaska governor and vice presidential candidate Sarah Palin tweeted that her house is not intact after the quake, but did not elaborate on specific damage.

"[Pray] for Alaska. Our family is intact -- house is not... I imagine that's the case for many, many others. So thankful to be safe; praying for our state following the earthquake," she said on her verified Twitter account.

The Dena'ina Civic and Convention Center in downtown Anchorage was opened as a safe shelter for people unable to get home.

Two of the city's main hospitals -- Alaska Regional and Providence Alaska Medical Center -- sustained damage during the quake, according to hospital officials.

The Anchorage Police Department said in a statement that it was handling "multiple situations" and reported "major infrastructure damage" across the city.

"We do not yet know when flights into Anchorage will resume," FAA spokesman Allen Kenitzer said.

The FAA said the tower at Ted Stevens Anchorage International Airport was evacuated.

International Airport Road near Ted Stevens has been damaged, the airport said via Twitter, advising motorists to use extreme caution.

Blair Braverman said she was staying in a hotel with her husband when the quake hit. She grew up in California and was familiar with earthquakes "but this was next-level," she said.

"The bed started shaking, everything was shaking so dramatically," she told CNN.

"My husband sort of crawled across the room and threw himself on top of me and we crawled to the bathroom together and waited it out in the doorway and waited out the aftershocks."

"The structure of the roof just collapsed," one of them said. "We can't even get into our studio right now. There were computers flying, cameras toppling over."

The NOAA alert had said that "for other US and Canadian Pacific coasts in North America, the level of tsunami danger is being evaluated. Further information will be provided in supplementary messages."

7.2 earthquake here in Anchorage, Alaska. This is a video my dad took from the Minnesota exit ramp from international. 😰😰 pic.twitter.com/1yOGj3yz9q