Face transplant recipient shares his new reflection with the world 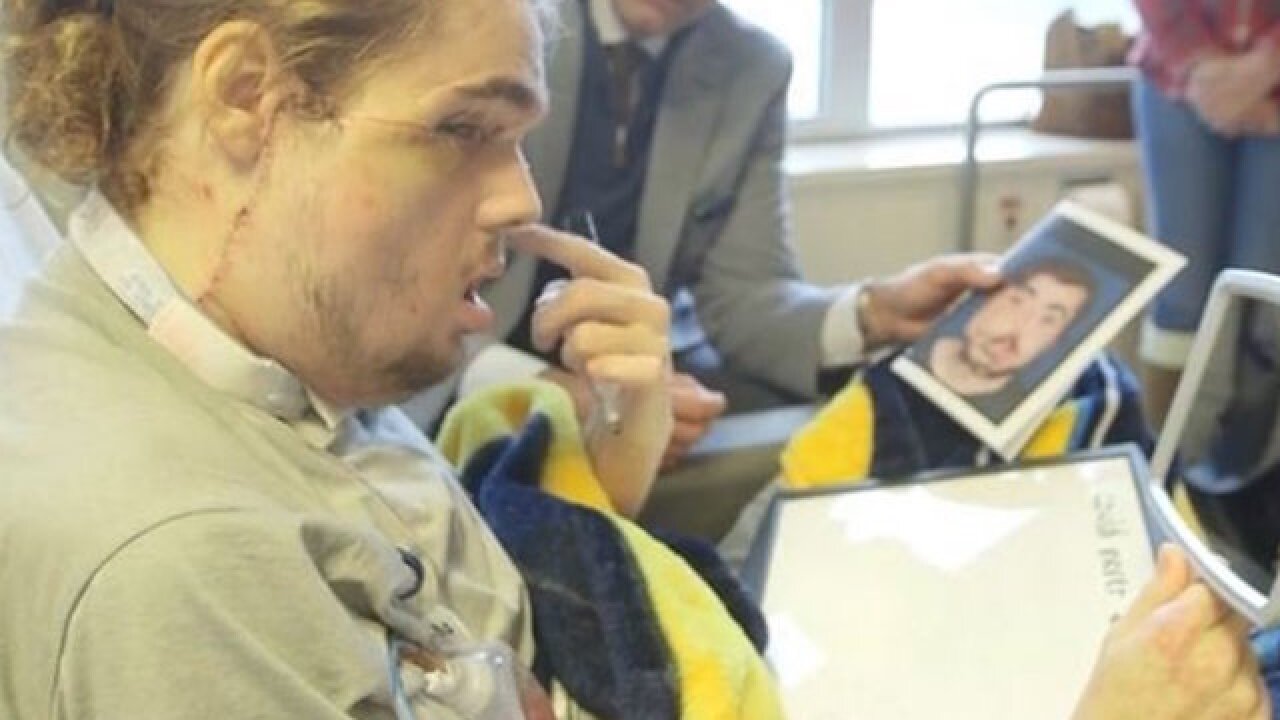 © 2018 Cable News Network, Inc.
NYU Lagone/CNN
<p>Less than 11 months after Cameron Underwood underwent a face transplant, the 26-year-old is revealing himself to the world.</p>

Less than 11 months after Cameron Underwood underwent a face transplant, the 26-year-old is revealing himself to the world.

Underwood, of Yuba City, California, sustained a self-inflicted gunshot to the face in June 2016. The extensive damage left him missing most of his lower jaw, his nose and every tooth but one, a statement said. He also experienced damage to his upper face and palate.

Conventional reconstructive surgery, which he reportedly tried several times, could only do so much.

Then, Underwood's mother, Beverly Bailey-Potter, read a magazine article about Dr. Eduardo Rodriguez, a professor of reconstructive plastic surgery and the chair of the plastic surgery department at NYU Langone Health.

"We knew he was the only person to whom we would trust Cameron's life," she said in the release from the hospital. "We were willing to travel the long distance."

Since the first face transplant was done in France in 2005, more than 40 have been completed around the world.

NYU Langone Health has completed two of the procedures and has a designated face transplantation program, one of just a handful in the United States. Rodriguez completed two previous face transplants, the first at University of Maryland, and headed up a team of more than 100 medical professionals who tackled Underwood's case.

The transplant surgery lasted about 25 hours.

Underwood's journey has been marked by milestones.

The time between his injury and face transplant was just about 18 months, the shortest period between the two in publicly reported cases in the United States, the hospital said.

This is significant in helping his physical, emotional and psychological recovery, Rodriguez said.

"Cameron has not lived with his injury for a decade or longer like most other face transplant recipients have," Rodriguez said in the statement. "As a result, he has not had to deal with many of the long-term psycho-social issues which often lead to issues like severe depression, substance abuse, and other potentially harmful behaviors."

Underwood also experienced one of the shortest wait times for a donor, the hospital said. Once he was approved for a transplant by NYU Langone and put on the list for organ donation, he waited only six months for the early January call that would change his life.

His donor was William Fisher, a 23-year-old resident of New York who was an aspiring filmmaker and writer. Fisher, who registered as an organ donor when he was a teen, gave to more than just Underwood. He also gave his heart, kidneys, liver, eyes and other tissues.

In honoring her son's wishes, Fisher's heartbroken mother got something in return.

"Being a part of this experience has been a source of strength for me during a very difficult time," she said in the statement. "I don't think I would have survived Will's death if not for Cameron. Cameron has his whole life ahead of him -- and I love the idea that Willie is helping him have a better life."

Underwood was discharged from the hospital in mid-February but initially stayed in New York for rehabilitation, which included speech therapy, and orthodontic treatment. By the end of March, he was home in California -- though he's made monthly trips back to New York for followup visits.

He will remain on anti-rejection drugs throughout his life but to date has responded well. And he's grateful for this second chance at life -- and the medical team and donor who made it possible.

"We hope my experience inspires others who have severe facial injuries to have hope, as I was inspired by others who came before me," Underwood said in the statement. "The journey hasn't been easy, but it's been well worth it."