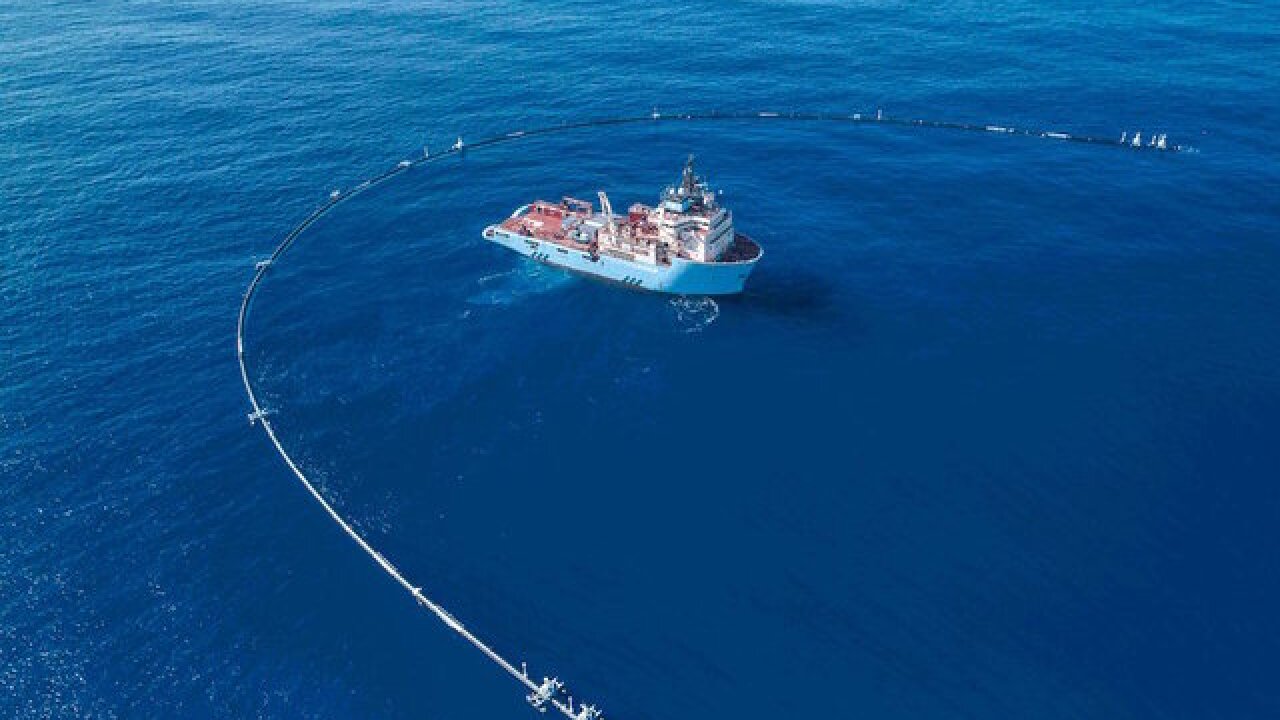 © 2018 Cable News Network, Inc.
Courtesy The Ocean Cleanup
<p>A 2,000 foot-long floating pipe nicknamed Wilson is about to start its mission to collect all the plastic in the middle of the Pacific Ocean.</p>

A 2,000 foot-long floating pipe nicknamed Wilson is about to start its mission to collect all the plastic in the middle of the Pacific Ocean.

Last month, the Ocean Cleanup foundation launched the world's first ocean cleanup system out of San Francisco to take on the notorious "Great Pacific Garbage Patch," a giant floating trash pile between San Francisco and Hawaii that is twice the size of Texas. It's the largest of five ocean trash piles on Earth.

The pipe is set to arrive at its destination in the ocean on Tuesday and begin the cleanup process soon after, according to a company spokesperson.

The pipe, which is in the shape of a U, features a 3-meter deep net underneath it to trap floating plastic under the water's surface. A boat will return to the spot every couple of months to remove the debris -- like a garbage truck for the ocean -- and return it to shore. The goal is to recycle the plastic and create new products.

With about 150 million tons of plastic in the world's oceans -- and that number expected to triple in the next decade -- this type of trash disposal has real implications for climate change, the safety of sea life and industries such as fishing and tourism. It can also affect our health if plastic ends up in the food we eat.

The trash collects in the middle of the U-shaped pipe until a garbage boat comes to collect it. The device has satellite pods that communicate with the company's headquarters in the Netherlands and other boats to share its location. It's controlled remotely and has two cameras located in the center.

The Ocean Cleanup team has been researching and testing the pipe for the past five years. In 2013, the project raised over $2 million through crowdfunding and has since raised over $30 million.

But some experts question whether how much a system like this can be a real impact on such large oceans. It's also faced criticism for its inability to capture small pieces of debris and the possibility of some sea life getting trapped inside. Some critics also worry if the device could break down, whether due to malfunction or storms, and create even more ocean garbage.

Eben Schwartz, the marine debris program manager at the California Coastal Commission, said his main concern is the percentage of plastic that floats and could be collected this way is too small to make a difference. He believes focusing on trash reduction with land-based efforts will be more effective.

"It's much more effective from a cost and prevention effort to stop trash from entering in the first place," Schwartz said.

Schwartz added that his water and beach cleanup volunteer group collected between 7 and 10 times the amount of trash Ocean Cleanup wants to capture by spring 2019.

"We did it in three hours and for a fraction of the cost of The Ocean Cleanup's project."

Although Schwartz said that cleaning up the oceans is important, he believes the attention around the project could curb other efforts to reduce waste.

"If this makes people feel like they don't need to worry about recycling because this thing is out there, that's a serious negative consequence," he said.

The need to clean up our oceans is getting attention beyond this project. Last week, President Donald Trump signed the Save Our Seas Act, which aims to help clean ocean waste by extending its own ocean cleanup initiative, the Marine Debris Program, for five more years.

It may not be the only effort around, but Slat believes his pipe will make a big difference.

"Back in the day people said, 'Well, there's no way to clean this up. The best thing we could do is not make it worse,'" Slat said. "But to me that's a very uninspiring message. Everyone wants the future to be better than the present, and that's what we hope to achieve."