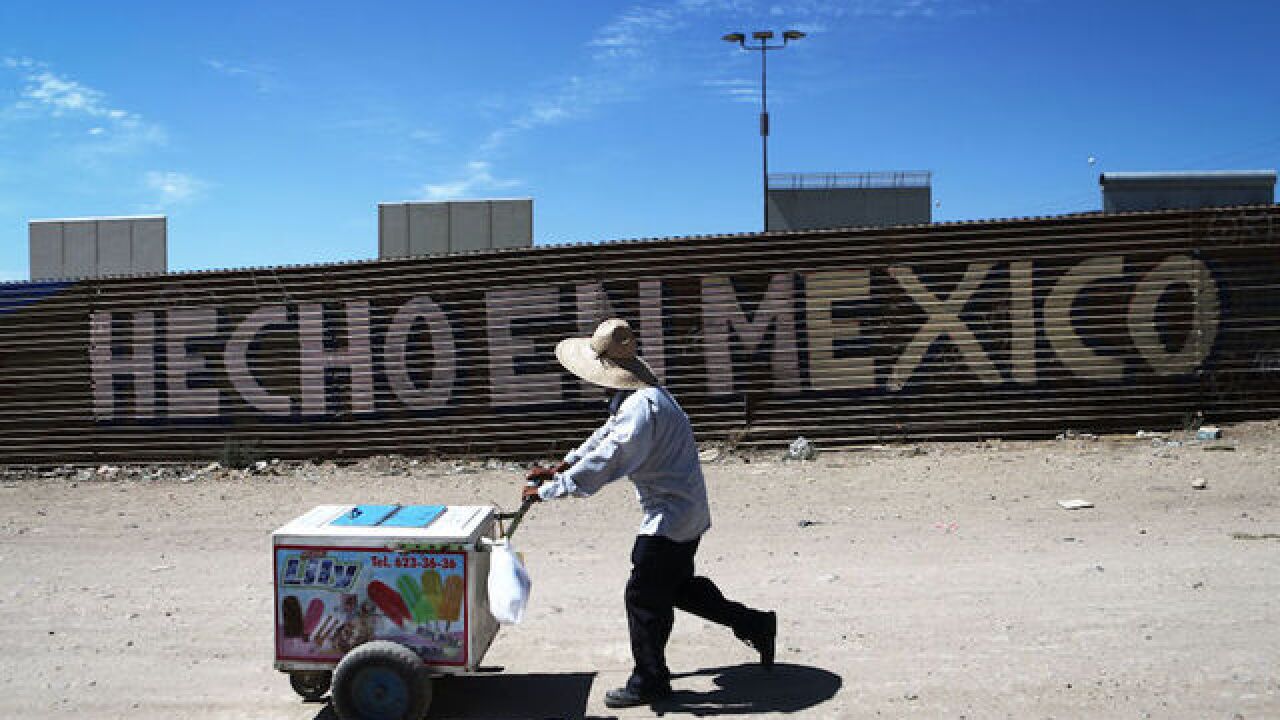 Image copyright 2018 Getty Images. All rights reserved. This material may not be published, broadcast, rewritten, or redistributed.
Mario Tama
<p>An ice cream vendor walks on a road along the U.S.-Mexico border fence, with President Trump's border wall prototypes in the background and graffiti in Spanish reading 'Made in Mexico' on July 21, 2018 in Tijuana, Mexico. </p>

House Majority Leader Kevin McCarthy plans to introduce legislation this week that will fully fund President Donald Trump's proposed wall along the U.S.-Mexico border with a whopping $23.4 billion price tag, a spokesperson for the California Republican told CNN on Tuesday.

The bill is still in the drafting process but is expected to be released within the next few days in the pro-forma session this week. The House remains in recess until mid-November, after the midterm elections, so the body would not consider the legislation for another month or so. Even with a Republican-controlled Capitol Hill and White House, any proposal to fully fund Trump's signature campaign pledge of a border wall would have a difficult pathway to passing both chambers of Congress, given the threshold for such legislation and the narrow margin of control in the Senate.

The legislation comes as McCarthy is headed to the U.S.-Mexico border on Wednesday for a tour and briefing by the Department of Homeland Security and as the California congressman continues to push to succeed Speaker Paul Ryan when the Wisconsin Republican departs in January.

Mccarthy is not the only House Republican to express interest in leading the caucus. Majority Whip Steve Scalise of Louisiana and House Freedom Caucus co-founder Jim Jordan of Ohio have talked about pursuing the top House GOP spot, and both are traditionally affiliated with the more conservative side of the caucus members. Scalise has said he would not run to lead the party if McCarthy does, but Jordan has already announced his intention to seek the position.

McCarthy, who has allied himself closely with Trump in the last two years, is working on the border wall bill by himself at this point, with no cosponsors.

"This is priority for both Kevin and the President," the spokesperson told CNN.

The legislation will include other policy measures popular with hardline immigration hawks, including several that have already passed the House. This includes Kate's Law , the No Sanctuary for Criminals Act, the Criminal Gang Alien Gang Member Removal Act and two other House resolutions that passed this year. Those measures have languished in the Senate, where Republicans control 51 votes in a chamber where the vast majority of legislation needs a minimum of 60 senators in support to advance. Democrats have almost unanimously opposed those measures.

Money for the border wall has been among the most contentious issues in funding negotiations between Democrats and Republicans for Trump's entire time in office. In an omnibus spending deal that was signed into law in March was $1.6 billion in border security, which includes millions for 33 miles of new border fencing -- not a concrete wall -- that was already authorized through the 2006 Secure Fence Act.

As the legislation is still being written, it's not clear if McCarthy's proposal of a $23.4 billion package would have any element of the wall paid for by Mexico, as Trump repeatedly promised on the campaign trail.

More border wall money from the U.S. will have to go through the appropriations bill that funds the Department of Homeland Security. It's one of the bills the House of Representatives didn't finish on time before September 30, leaving it funded at the previous year's levels until December 7. Aides in both chambers, in both parties, think the fight over wall funding levels after the election could lead to a government shutdown -- something Trump himself has advocated as part of a negotiating strategy.

Ryan previewed the possibility of a border wall fight during comments to reporters on Monday in Washington.

"Yes, we intend on having a full-fledged discussion about how to complete this mission of securing our border, and we will have a big fight about that," he said. "What that fight looks like ... we have a commitment to go fight for securing the border and getting these policy objectives achieved. And we're going to be looking at doing it. We'll figure out how to do it in December."

Even if the bill passed the House, it would need 60 votes to clear the Senate, an unlikely threshold to reach considering Democrats' vocal opposition to the President's border wall.