Jamal Khashoggi: Turkey claims to have evidence that journalist was tortured, murdered by Saudis 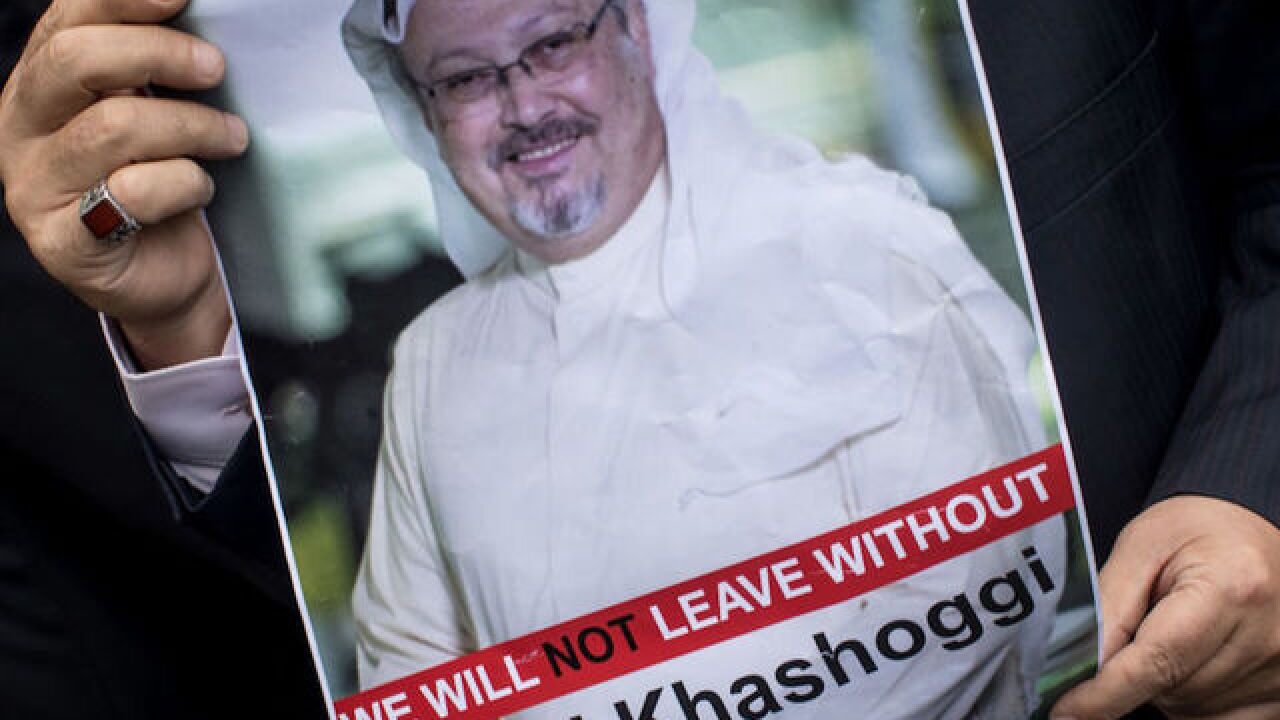 Image copyright 2018 Getty Images. All rights reserved. This material may not be published, broadcast, rewritten, or redistributed.
Chris McGrath
<p>ISTANBUL, TURKEY - OCTOBER 08: A man holds a poster of Saudi journalist Jamal Khashoggi during a protest organized by members of the Turkish-Arabic Media Association at the entrance to Saudi Arabia's consulate on October 8, 2018 in Istanbul, Turkey. Fears are growing over the fate of missing journalist Jamal Khashoggi after Turkish officials said they believe he was murdered inside the Saudi consulate. (Photo by Chris McGrath/Getty Images)</p>

Turkish authorities have audio and visual evidence that shows journalist Jamal Khashoggi was killed inside the Saudi consulate in Istanbul just over a week ago, a source familiar with the ongoing investigation told CNN.

The source, who was briefed by a Western intelligence agency, says the evidence showed there had been an assault and a struggle inside the consulate. There is also evidence of the moment that Khashoggi was killed, the source said.

The foreign intelligence service was shocked by the nature of the evidence, provided in a briefing from Turkish officials, the source told CNN.

Khashoggi, a columnist for the Washington Post, walked into the consulate in Istanbul on October 2 intending to get paperwork that would allow him to marry his Turkish fiancée. He hasn't been seen in public since.

Saudi Arabia firmly denies any involvement in his disappearance and says he left the consulate that afternoon. His fiancée, Hatice Cengiz, who was waiting outside says she did not see him re-emerge. Turkey has called on Saudi officials to provide evidence that he left the consulate, as they claim.

The Washington Post reported late Thursday that the Turkish government had told US officials that it was in possession of audio and video recordings proving that Khashoggi was murdered in the consulate, citing unnamed US and Turkish sources.

The audio recording in particular provided "persuasive and gruesome evidence" that a Saudi team dispatched to Istanbul was responsible for Khashoggi's death, the Post reported.

"You can hear his voice and the voices of men speaking Arabic," one person with knowledge of the recording told the Post. "You can hear how he was interrogated, tortured and then murdered."

International pressure has mounted on Saudi Arabia to explain what happened to Khashoggi, a former Saudi royal insider who became a critic of the regime and Crown Prince Mohammed bin Salman, who is known as MBS.

The business world has also signaled its disquiet, with British tycoon Richard Branson saying he's pulling back from two tourism projects in Saudi Arabia and has suspended discussions with Riyadh about a $1 billion investment in Virgin's space companies. Business leaders have also started pulling out of a key conference hosted by MBS in late October.

Turkish authorities believe 15 Saudi men who arrived in Istanbul on October 2 were connected to Khashoggi's disappearance and possible murder. At least some of them appear to have high-level connections in the Saudi government.

On Thursday, a US official familiar with the intelligence told CNN that the US had intercepts of Saudi officials discussing a plan to lure Khashoggi back to Saudi Arabia and detain him.

Washington's "working assumption" is that Khashoggi was murdered inside the consulate in Istanbul, according to a US official familiar with the latest intelligence. "We are pretty clear eyed it is likely to have happened and it didn't end well," the official said. The source did caution that this was the latest assessment and no conclusions had been made.

A source who knows Khashoggi told CNN that Saudi authorities made several attempts to reach out to Khashoggi in 2017, including proposing he lead a think tank funded by the state. The source says that Khashoggi rejected the ideas and over the following months his much sharper criticism of the government, in its domestic policy and relating to the crisis with Qatar, ended any dialogue.

The source, who maintains high-level contact inside the kingdom, says that senior figures in the Royal Court in Riyadh were especially infuriated by Khashoggi's criticism of the decision by the Saudi authorities to classify in September 2017 the Muslim Brotherhood and the Islamic scholar Yusuf al-Qaradawi as terrorists. At the same time, the source says, Khashoggi became more wary of returning to the kingdom.

US President Donald Trump said his administration was being "very tough" with Saudi Arabia as it investigates Khashoggi's case.

"We're being very tough and we have investigators over there and we're working with Turkey and frankly we're working with Saudi Arabia. We want to find out what happened," Trump said during a phone interview Fox and Friends on Thursday.

"We're probably getting closer than you might think," to finding out what happened, Trump said.

Asked whether the US has investigators on the ground in Turkey, the FBI would not confirm or comment. A Turkish diplomatic official has denied that the US has sent investigators to Turkey to look into Khashoggi case, saying the reports are "not true."

The UK and France have expressed concern over the disappearance.

However, Trump said Thursday that he was reluctant to take action, particularly on the issue of arms sales. "There are other things we can do," he told reporters at the White House.

"I don't like the concept of stopping an investment of $110 billion into the United States because you know what they're going to do, they're going to take that money and spend it in Russia or China," Trump said, referring to a US arms deal with Saudi Arabia. "If it turns out to be as bad as it might be, there are certainly other ways of handling the situation."

"Let's find out what the problem is first," Trump said.

The US signed a nearly $110 billion defense deal with Saudi Arabia in May 2017, when Trump made Saudi Arabia a stop on his first foreign trip as president. The stop was seen, in part, as an endorsement of the strong relationship between Trump, Jared Kushner -- his son-in-law and senior adviser -- and MBS.

The prince reached out to the White House and specifically Kushner early this week to deny the accusations after it became clear he and the royal court were suspected of Khashoggi's possible murder, according to a person familiar with the call.

But national security adviser John Bolton also joined the call and later Secretary of State Mike Pompeo had his own conversation, making clear the prince would not be able to go around them.

An administration official tells CNN that Pompeo and the State Department are taking a leading role in the liaising with the Saudi government over the case.

Saudi officials had agreed to allow Ankara to inspect the consulate as part of Turkey's investigation into the missing journalist.

A senior Turkish official speaking on the condition of anonymity had previously told CNN that "the Saudis are not cooperating fully with the investigation. They are not open to cooperating."

Sabah, a pro-government private newspaper in Turkey, on Tuesday listed 15 names alongside photographs of men who authorities believe were flown into Istanbul from Riyadh. The state-run Anadolu news agency later published similar details on eight of the individuals.

One of the Saudi men was identified by Turkey's official Anadolu Agency and Sabah as Salah Muhammed al-Tubaiqi. He is listed on an official Saudi health website as the head of the forensic medicine department at the interior ministry.

Another member of the group identified by Turkish official media, Muhammad Saad al-Zahrani, has appeared on Saudi state TV alongside MBS.

All 15 arrived and left Turkey on October 2, the day of Khashoggi's disappearance, according to Turkish officials. Zahrani and Tubaiqi left Istanbul 45 minutes apart, according to Anadolu.

An official quoted by the New York Times described the alleged murder operation as "quick and complex," and that Khashoggi was killed within two hours of his arrival at the consulate. The agents "dismembered his body with a bone saw they brought for the purpose," the official told the paper, adding "It's like 'Pulp Fiction.'"

Turkish officials are investigating whether Khashoggi's Apple Watch reveals clues as to what happened to him inside the Saudi consulate, examining whether data from the smartwatch could have been transmitted to a cloud, or his personal phone, which was with Cengiz outside, Reuters reported, citing two senior Turkish officials.