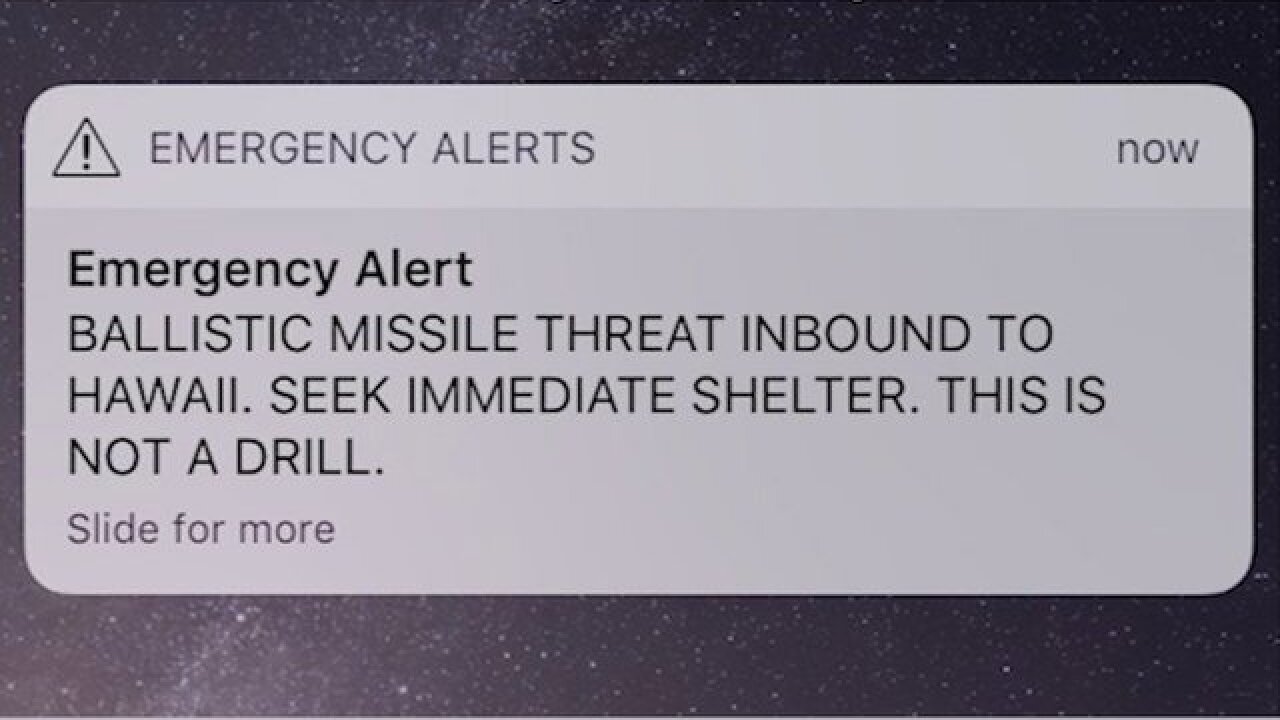 © 2018 Cable News Network, Inc.
Tulsi Gabbard/Twitter
<p>On Saturday, January 13, 2018, an emergency missile alert accidentally went out to everyone in Hawaii, causing mass panic as people thought they were about to die.</p>

A man and his girlfriend sued the state of Hawaii, saying the false missile alert debacle earlier this year caused him to have a heart attack.

In the suit, Shields and Reichel say they were driving to the beach on January 13 when they received alerts on their cell phones that a missile was headed toward Hawaii and that they needed to find shelter.

"Both plaintiffs believed this message to be true and were extremely frightened and thought they were shortly going to die," the lawsuit reads. "They decided that there was not much they could do to protect themselves from this threat and decided that if they were going to die, they might as well die together on the beach."

Reichel then got a call from her son, who serves in the Hawaii Army National Guard. He told her the threat was real, heightening their fears even more.

Minutes later, they arrived at the beach and began calling loved ones, saying their goodbyes. Right after Shields called his son and daughter who live on the US mainland, he said he started to feel "a severe and painful burning" in his chest.

He went to a hospital where he went into cardiac arrest. A doctor performed CPR, and Shields then underwent emergency surgery.

The damage to Shields' heart since the heart attack has been confirmed by several tests, the suit says.

First a scare, then a heart attack

A California doctor pinned the blame for the medical emergency squarely on the false missile alert.

"In my opinion, the warning there was an imminent missile attack about to hit Hawaii was a substantial contributing factor in causing the heart attack and cardiac arrest," John S. MacGregor, a cardiologist and professor of medicine at the San Francisco School of Medicine, said in the lawsuit. "Mr. Shields had no known cardiac disease. Within 15 minutes of learning of the impending missile attack, Mr. Shields had developed symptoms of an acute myocardial infraction. Shortly after that, he experienced a cardiac arrest."

By the time Shields and Reichel had reached the hospital, the state had already sent out a second message to phones in Hawaii 38 minutes after the initial alert saying it was a false alarm. But the couple didn't see it, the lawsuit says, because they were too busy dealing with Shields' heath emergency.

CNN reached out to Hawaii Attorney General Russell A. Suzuki's office for comment and is waiting to hear back.

The false missile alert caused a mass panic in Hawaii back in January, during a time of heightened rhetoric between the US and North Korea. The false alert was sent out during an emergency drill by a Hawaii Emergency Management Agency worker who mistakenly thought the drill was the real thing.

Miyagi later resigned, and the probe into the debacle produced two dozen recommendations, including eliminating practice drills during a shift change, stronger confirmation prompts for those sending an alert and improved training.