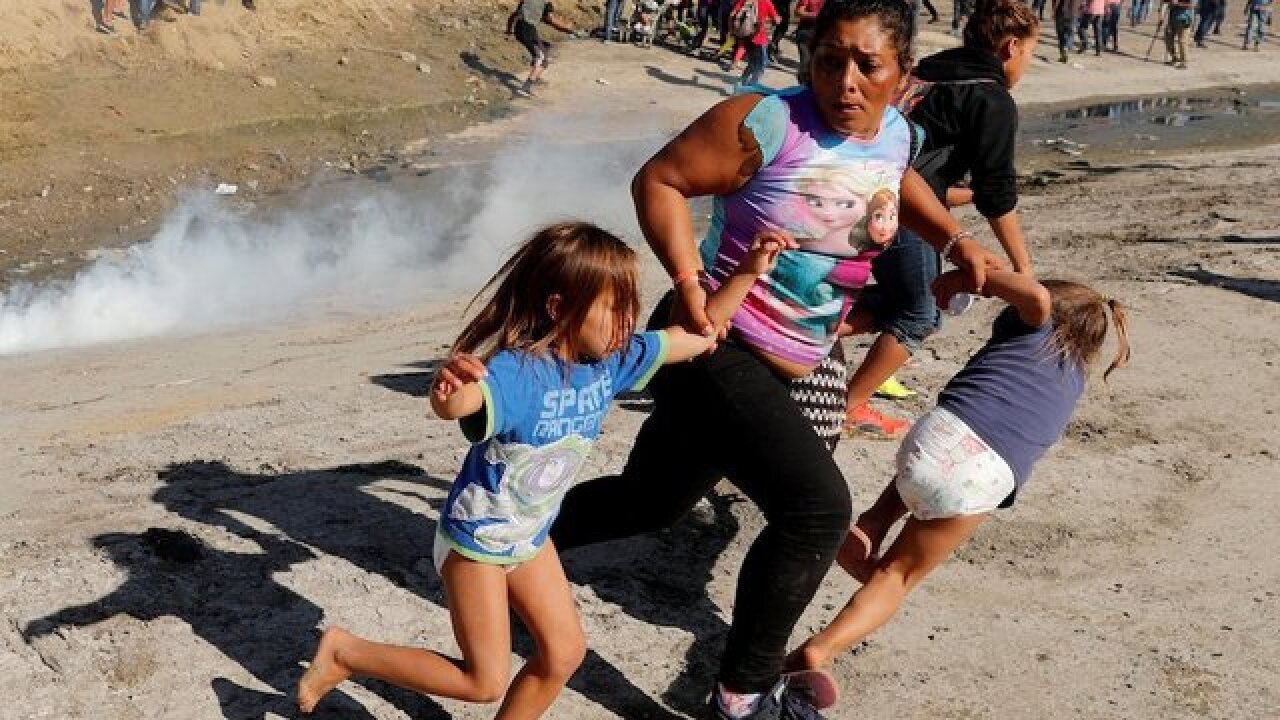 They've spent weeks trekking across Mexico, trying to reach the United States. But dozens of migrants will be deported and will never touch US soil, Mexican authorities said.

About 500 migrants on the Mexican side of the border overwhelmed police blockades near the San Ysidro Port of Entry on Sunday, two journalists in Tijuana told CNN. That forced a temporary closure of the major border crossing into San Diego.

Tijuana police said they arrested 39 people Sunday in connection with the attempt to cross the border illegally.

Those identified as trying to rush the US border illegally will be processed for deportation in their home countries, Mexico's Interior Ministry said.

On the US side, about 42 people who managed to cross the border were arrested, said Rodney Scott, chief patrol agent of the San Diego Sector Border Patrol.

"Only eight of those were females, and there were only a few children involved," he said. "The vast majority of the people we're dealing with are adult males."

US President Donald Trump threatened to close the border "permanently if need be." He also claimed many of the migrants are "stone cold criminals," but gave zero evidence to support that claim.

"Mexico should move the flag waving Migrants, many of whom are stone cold criminals, back to their countries," Trump tweeted Monday. "Do it by plane, do it by bus, do it anyway you want, but they are NOT coming into the U.S.A. We will close the Border permanently if need be. Congress, fund the WALL!

As the migrants tried to cross the border, authorities on the US side used tear gas to disperse them, the journalists said. Video of the scene showed a cloud of tear gas that sent people running and screaming, including families with young children.

"Border Patrol agents deployed tear gas to dispel the group because of the risk to agents' safety," the agency said on Twitter.

The incident marked an escalation of tensions that have been mounting since groups of Central American migrants began arriving in Tijuana a few weeks ago on their journey to attempt entry into the United States.

The migrants' presence has drawn demonstrators -- for and against them -- and threats from Trump to close the US-Mexico border. Meanwhile, Tijuana's mayor has called on the Mexican government and the international community for help.

The melee closed one of the world's busiest international crossings, San Ysidro Port of Entry, to vehicle and pedestrian traffic for several hours. By Sunday afternoon, CBP reopened crossing lanes in both directions to pedestrians and vehicles.

How the incident began

In Mexico, the march started at the Benito Juárez Sports Complex -- where most of the migrants are staying -- and continued to the border.

Organizers said the march would be peaceful. In response, CBP deployed additional personnel to San Ysidro on Sunday in expectation of demonstrations on both sides of the border.

As migrants reached the border area, some protesters split off toward multiple locations, CBP said. Some attempted to enter through San Ysidro and were turned away, the agency said. Others tried to enter "directly east and west of the border crossing."

After they were prevented from entering the port of entry, some of the migrants "attempted to breach legacy fence infrastructure along the border and sought to harm CBP personnel by throwing projectiles at them," Secretary of Homeland Security Kirstjen Nielsen said in a statement.

"DHS will not tolerate this type of lawlessness and will not hesitate to shut down ports of entry for security and public safety reasons. We will also seek to prosecute to the fullest extent of the law anyone who destroys federal property, endangers our front-line operators, or violates our nation's sovereignty," Nielsen said.

It described Sunday's incident as "acts of provocation" and warned that far from helping the migrants' cause, it could result in a serious incident on the border.

'People of Tijuana will not pay'

The mayor of Tijuana said on Sunday that he would not let the migrants' actions damage the city's relationships across the border. Residents of Tijuana work, study and visit the United States each day, and the border closures affect them, too, Juan Manuel Gastélum Buenrostro tweeted Sunday.

The mayor previously said he will not commit city resources to the migrants, including money or public services. He called on the Mexican government -- specifically, President Enrique Peña Nieto and his secretary of domestic affairs -- to provide assistance.

"The people of Tijuana will not pay for the stay of these migrants. I will not send Tijuana into debt, just like I have been able to avoid the last two years," he said in a November 22 Facebook post.

"We are dealing with a humanitarian crisis and the federal government must step up to its responsibility!!!"

Mexico will get a new government soon

On Saturday, the Washington Post reported that Obrador's government supported a Trump administration plan to require people seeking asylum to remain south of the US border while their applications are being processed.

"For now, we have agreed to this policy of Remain in Mexico," Olga Sánchez Cordero, López Obrador's top domestic policy official as Mexico's interior secretary-elect, told the Post. She also called it a "short-term solution."

But Mexico's incoming government on Saturday night denied that an official deal had been made regarding migrants staying in the country before entering the United States, Sánchez Cordero, said according to a statement acquired by CNN.

"Mexico's next federal administration does not consider within its plans that Mexico assume the condition of 'third secure country' for the attention of Central American migrants or citizens of other countries in Mexican territory or those who will have that intention in the future," Sánchez Cordero said in the statement.