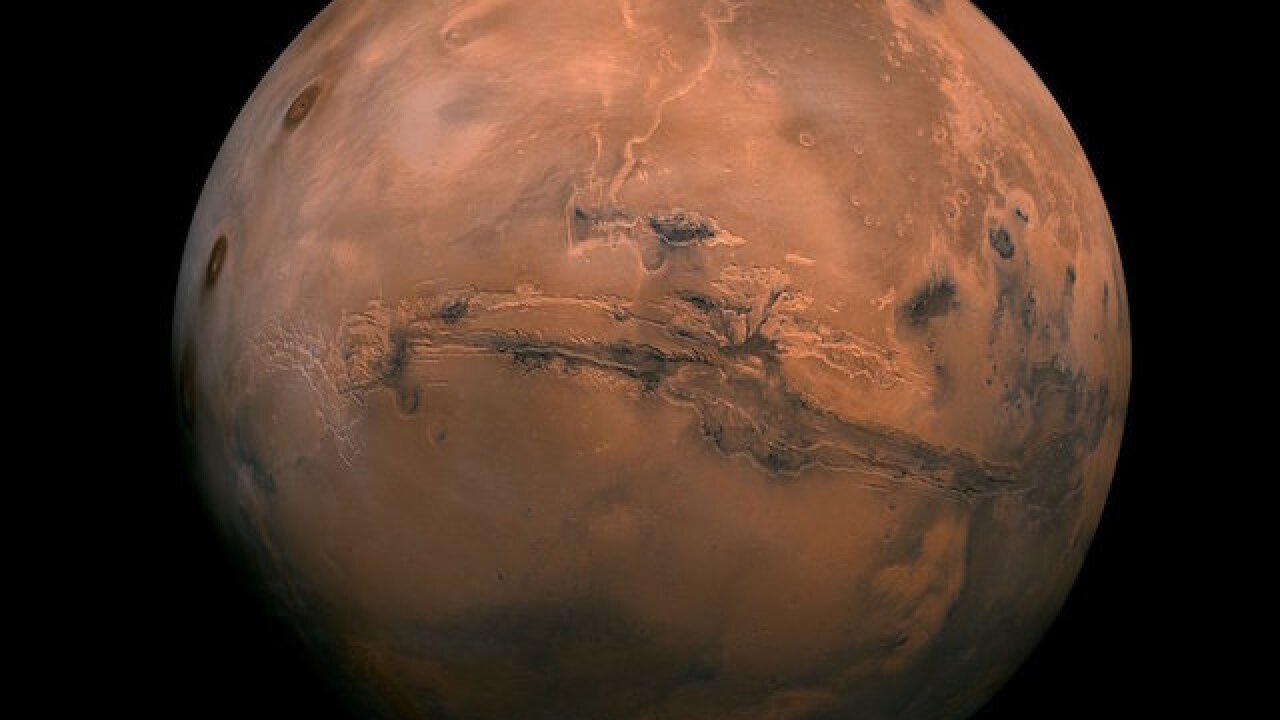 After seven months of traveling through space, the NASA InSight mission has landed on Mars. A few minutes later, InSight sent the official "beep" to NASA to signal that it was alive and well, including a photo of the Martian surface where it landed.

Mission Control at NASA's Jet Propulsion Laboratory exploded into celebratory applause and cheers after the touchdown was confirmed.

InSight, or Interior Exploration using Seismic Investigations, Geodesy and Heat Transport, is going to explore a part of Mars that we know the least about: its deep interior. It launched May 5. InSight will spend two years investigating the interior where the building blocks below the planet's surface that recorded its history.

📸 Wish you were here! @NASAInSight sent home its first photo after #MarsLanding:

InSight’s view is a flat, smooth expanse called Elysium Planitia, but its workspace is below the surface, where it will study Mars’ deep interior. pic.twitter.com/3EU70jXQJw

To reach Mars, InSight cruised 301,223,981 miles at a top speed of 6,200 mph, while being followed by two cube satellites. The suitcase-size spacecraft, called MarCO, are the first cube satellites to fly into deep space. MarCO will try to share data about InSight when it enters the Martian atmosphere for the landing.

"We've studied Mars from orbit and from the surface since 1965, learning about its weather, atmosphere, geology and surface chemistry," said Lori Glaze, acting director of the Planetary Science Division in NASA's Science Mission Directorate. "Now we finally will explore inside Mars and deepen our understanding of our terrestrial neighbor as NASA prepares to send human explorers deeper into the solar system."

InSight robotically guided itself through the landing, outside of a few last minute tweaks by the entry, descent and landing team to the algorithm that guides the lander to the surface.

The landing itself is a tricky maneuver. NASA engineers don't call it "seven minutes of terror" for nothing. In less time than it takes to hard-boil an egg, InSight slowed from 12,300 mph to 5 mph before it gently landed on the surface of Mars, according to NASA.

"While most of the country was enjoying Thanksgiving with their family and friends, the InSight team was busy making the final preparations for Monday's landing," said Tom Hoffman of JPL, InSight's project manager. "Landing on Mars is difficult and takes a lot of personal sacrifices, such as missing the traditional Thanksgiving, but making InSight successful is well worth the extraordinary effort."

Only 40% of missions sent to the Red Planet by any agency have been successful. Part of this is due to the thin Martian atmosphere, which is only 1% of Earth's, so there's nothing to slow down something trying to land on the surface.

Like the Phoenix spacecraft, InSight will have a parachute and retro rockets to slow its descent through the atmosphere, and three legs suspended from the lander will try to absorb the shock of touching down on the surface.

But the engineers prepared the spacecraft to land during a dust storm if need be.

About 20 minutes before landing, InSight separated from the cruise stage that helped bring it all the way to Mars and turned to position itself for entering the atmosphere.

At 2:47 pm ET, the entry, descent and landing phase began, and InSight came blazing into the atmosphere at 12,300 mph. Peak heating of the protective heat shield reached 2,700 degrees Fahrenheit two minutes later. This is when the intense heat caused a temporary drop in the radio signal from the craft.

Then, the parachute deployed, the craft separated from the heat shield, deployed its three legs and activated radar to sense how far it is from the ground. After getting that radar signal, it separated from the remaining shell and parachute, firing its descent engines known as retrorockets to help slow it down even more.

In ballet-like fashion, InSight executed a gravity turn to make sure the lander was in the right position before touching down. It slowed down until it reached a consistent 5 mph. Then, it touched down at 2:54 pm ET.

Just before 3 p.m. ET, InSight sent a signal to let scientists on Earth know that it's alive and well.

"It's taken more than a decade to bring InSight from a concept to a spacecraft approaching Mars — and even longer since I was first inspired to try to undertake this kind of mission," said Bruce Banerdt of JPL and InSight's principal investigator. "But even after landing, we'll need to be patient for the science to begin."

InSight's science mission won't begin right away. It will take between two to three months for the robotic arm to place the mission's instruments on the surface. Meanwhile, mission scientists will photograph what can be seen from the lander's perspective and monitor the environment.

And Tuesday night, the Mars Odyssey orbiter should confirm that the spacecraft's solar arrays have unfurled.

InSight will be landing at Elysium Planitia, called "the biggest parking lot on Mars" by astronomers. Because it won't be roving over the surface, the landing site was an important determination. This spot is open, flat safe and boring, which is what the scientists want for a stationary two-year mission.

After landing, InSight will unfurl its solar panels and robotic arm and study the entire planet from its parking spot. It's along the Martian equator, bright and warm enough to power the lander's solar array year-round.

The suite of geophysical instruments on InSight sounds like a doctor's bag, giving Mars its first "checkup" since it formed. Together, those instruments will take measurements of Mars' vital signs, like its pulse, temperature and reflexes -- which translates to internal activity like seismology and the planet's wobble as the sun and its moons tug on Mars.

These instruments include the Seismic Experiment for Interior Structures to investigate what causes the seismic waves on Mars the Heat Flow and Physical Properties Package to burrow beneath the surface and determine heat flowing out of the planet and the Rotation and Interior Structure Experiment to use radios to study the planet's core.

"Landing on Mars is exciting, but scientists are looking forward to the time after InSight lands," said Glaze. "Once InSight is settled on the Red Planet and its instruments are deployed, it will start collecting valuable information about the structure of Mars' deep interior — information that will help us understand the formation and evolution of all rocky planets, including the one we call home."