People called 911 after seeing a dummy hanging from the roof. It was a 'Christmas Vacation' gag 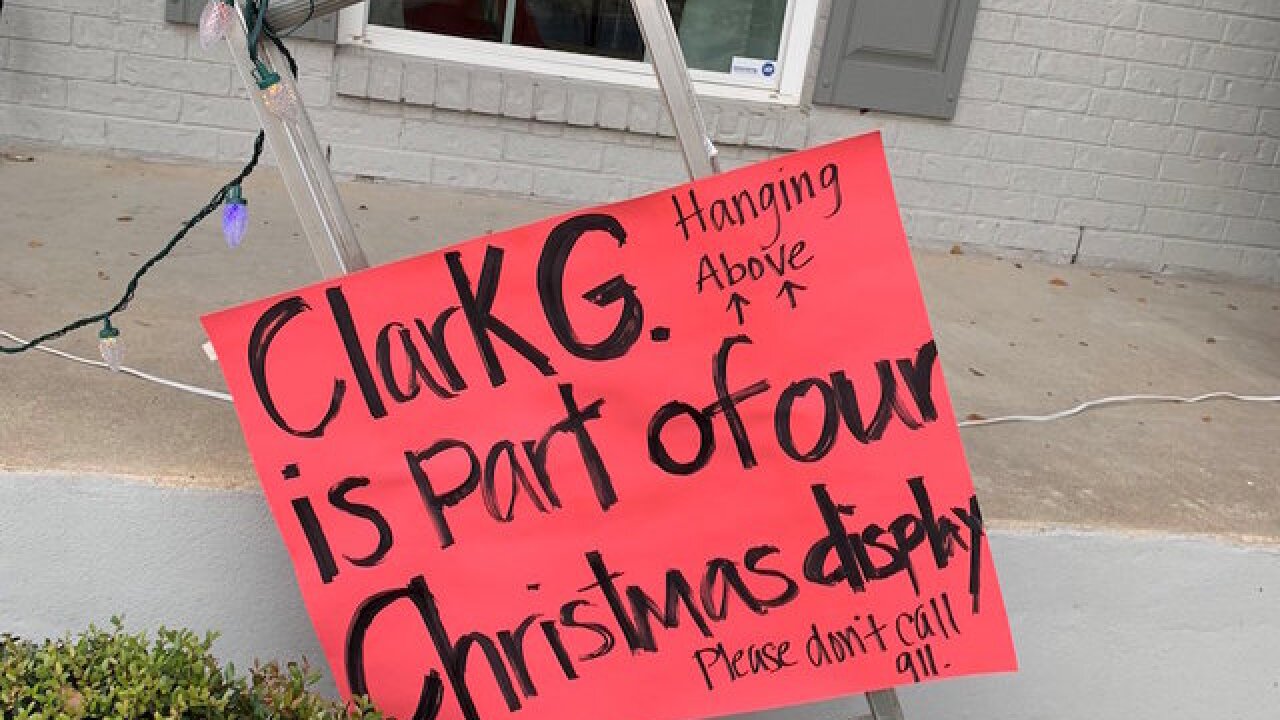 A Christmas display that's a little too life-like has led to some panicked calls to 911.

Chris Heerlein of Austin, Texas, recreated the famous scene of Clark Griswold hanging from the roof in the 1989 movie "National Lampoon's Christmas Vacation." For a week, a dummy has been hanging perilously from the side of his house, unable to reach a ladder that's fallen.

The knock-off was a bit too good. Last week, a day after the installation, Alfred Norwood Jr. stopped his car, jumped out and ran to help the man hanging from the roof.

The tense moment was captured on the Heerlein's Nest camera.

"Can you reach it? Can you reach it?" Norwood calls up to the man on the roof, as seen in the video. "Help!" he yells toward the street, turns away and runs back to call the police.

When Heerlein found out what happened, he and his family tracked down the good Samaritan to let him know the dummy was fine and thanked him for his efforts.

"The thing was out there only one day, and Alfred was running to save this man's life. Alfred is a veteran and it was his instinct. He was the only one who jumped out and tried to help," Heerlein told CNN on Monday.

"He thought the guy might have been electrocuted by the lights ... but the dummy wasn't responding," Heerlein said.

A police officer who came to the door after the mixup said police had received several calls about the Christmas display saying there was a man hanging from the roof.

After the attempted Clark Griswold rescue, Heerlein said he put up a sign letting people know Griswold is fine.

"Clark G. is part of our Christmas display. Please don't call 911," reads the sign. "That so far has been sufficient," Heerlein said.

The homeowner and the good Samaritan reunited on Monday, a week after the incident. Norwood was rewarded for his efforts.

Norwood was the only person to stop and try to save the man, Heerlein said. Norwood served in the US Air Force and was assigned at the former Bergstrom Air Force Base, according to Heerlein.

"At the end of the day we were able to contact him and had him over to the house and thanked him for his service. And gave him a gift card," Heerlein said.

Norwood is now subscribed to a chili of the month club. It's a fitting gift inspired by the movie: Griswold received a jelly of the month subscription as a Christmas bonus from his boss.

When Heerlein first talked to the veteran on the phone, he asked if he needed anything. Norwood said he wanted to buy some groceries because he hardly had money to buy food. Heerlein gave him a $500 gift card for groceries when they met.

"Ultimately it's awesome that in this day and age there's a real quality human being out there," Heerlein said. "He's a hero in one sense. He was willing to jump out and run to the rescue and a lot of people didn't. It shows the true heart of the guy."