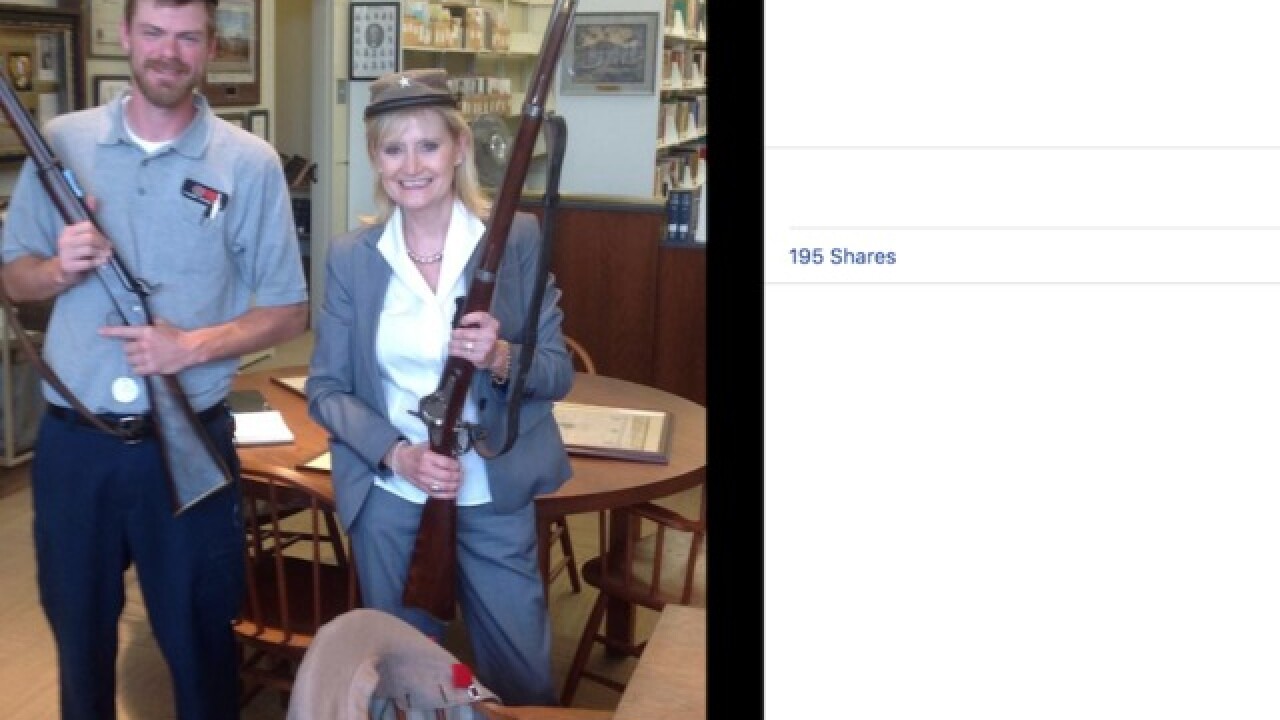 Copyright 2018 Scripps Media, Inc. All rights reserved. This material may not be published, broadcast, rewritten, or redistributed.
<p>(Facebook)</p>

Mississippi Sen. Cindy Hyde-Smith posed with Confederate artifacts in photos from 2014 that emerged Tuesday, the latest in a series of controversial moments for the freshman Republican senator who is facing a run-off next week.

In a photo posted to her Facebook account in 2014, Hyde-Smith was pictured posing with Confederate artifacts. The caption on the post read, "Mississippi history at its best!"

Hyde-Smith, who will face former Democratic Rep. Mike Espy in a Nov. 27 runoff election, posted the caption after touring Beauvoir, the home and library of Confederate President Jefferson Davis. In the post, Hyde-Smith appears in four photos posing with Confederate rifles, soldiers' hats and documents.

"I enjoyed my tour of Beauvoir. The Jefferson Davis Home and Presidential Library located in Biloxi," she wrote in the post on her Facebook page. "This is a must see. Currently on display are artifacts connected to the daily life of the Confederate Soldier including weapons. Mississippi history at its best!"

Mississippi was one of the southern states that seceded from the United States prior to the Civil War to form the Confederate States of America.

The photo and the caption referencing Mississippi's period in the Confederacy is another flashpoint for Hyde-Smith in the weeks leading up to her runoff election against Espy, who is black and would be the first African-American senator from Mississippi since Reconstruction. Hyde-Smith was appointed to the Senate earlier this year to replace Thad Cochran, who retired for health reasons.

At the time of the photo was taken, Hyde-Smith was the Mississippi Commissioner of Agriculture and Commerce.

The campaigns of Hyde-Smith and Espy did not immediately return a request for comment. The two will debate at 8 pm ET Tuesday.

In a video clip posted Thursday, Hyde-Smith said that making it "just a little more difficult" for some university students to vote was "a great idea."

"And then they remind me that there's a lot of liberal folks in those other schools who maybe we don't want to vote. Maybe we want to make it just a little more difficult. And I think that's a great idea," Hyde-Smith says in the video.

Hyde-Smith campaign spokeswoman Melissa Scallan said at the time, "Obviously Sen. Hyde-Smith was making a joke and clearly the video was selectively edited." The video includes no further context.

In another video posted earlier this month, Hyde-Smith made reference to a "public hanging," which conjured memories of public lynchings of African-Americans during the latter half of the 19th century and first half of the 20th century.

"If he invited me to a public hanging, I'd be on the front row," she said during what appeared to be a campaign event referencing the support of a Mississippi cattle rancher.

In a statement later that day, Hyde-Smith said that she "used an exaggerated expression of regard, and any attempt to turn this into a negative connotation is ridiculous."

Earlier on Tuesday, retail giant Walmart asked Hyde-Smith to return its donations to her campaign, joining Google, Union Pacific and Boston Scientific in rescinding their support of the Mississippi Republican.