Republicans give Trump a rare rebuke over 'go back' comments 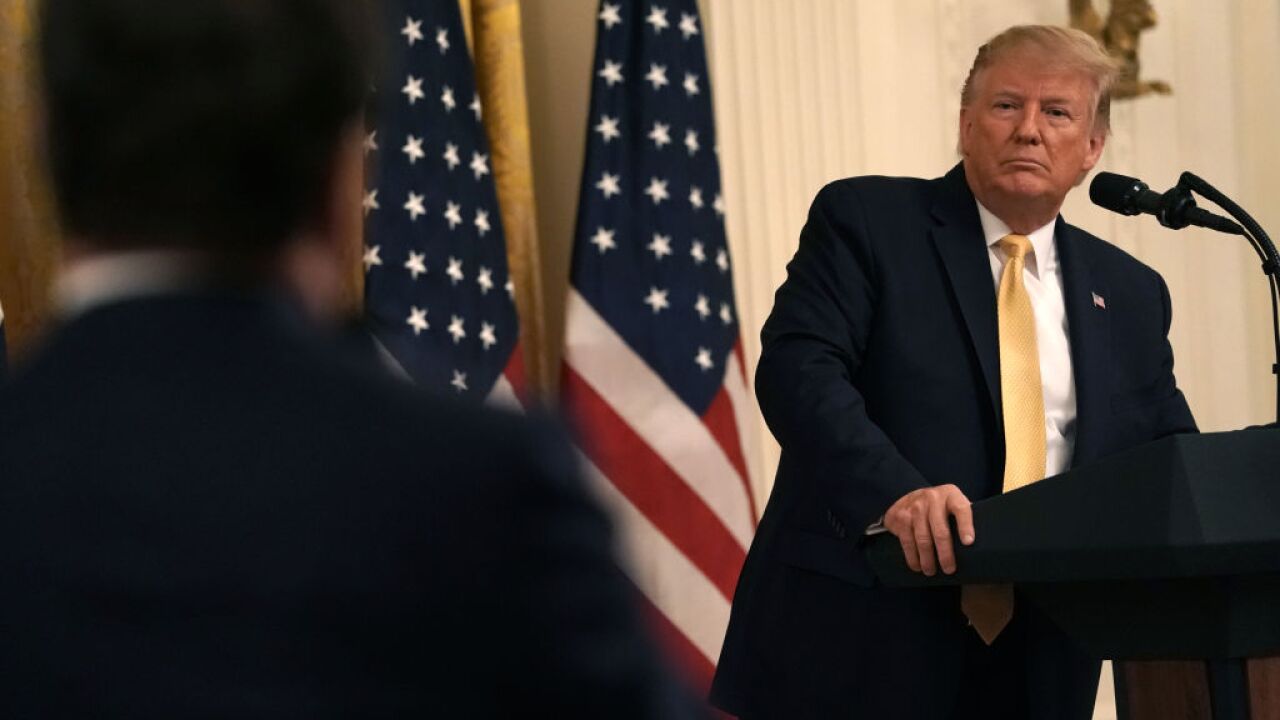 For many Republicans in Congress, President Donald Trump's call for some Democratic congresswomen to "go back and help fix the totally broken and crime infested places from which they came," was worthy of a rare rebuke.

As she entered Senate Majority Leader Mitch McConnell's office in the Capitol on Monday evening, GOP Sen. Joni Ernst of Iowa said that Trump's latest attacks were not only "not constructive" but racist.

"They're American citizens," she said.

On Sunday, Trump attacked unnamed "'Progressive' Democrat Congresswomen," saying they "originally came from countries whose governments are a complete and total catastrophe, the worst, most corrupt and inept anywhere in the world."

Usually Trump's attacks on Reps. Alexandria Ocasio-Cortez of New York, Ilhan Omar of Minnesota, Rashida Tlaib of Michigan and Ayanna Pressley of Massachusetts are uniformly greeted with cheers by all Republicans (of these four first-term women members of Congress, only Omar, a Somalian refugee, was born outside the United States).

But for many Republicans, his racist comments on Sunday were, as Sen. Susan Collins of Maine put it, "way over the line." Sen. Lisa Murkowski of Alaska said the comments were "spiteful" and urged a "higher standard of decorum and decency." Sen. Rob Portman of Ohio called them "divisive, unnecessary and wrong."

"We should defeat their ideas on the merits, not on the basis of their ancestry," said Sen. Pat Toomey of Pennsylvania.

"While we can vary on what policies we support, singling out people whose opinions differ from our own is bad for discourse and public civility," added Sen. John Boozman of Arkansas.

Still, Ernst was in an unusual position in calling Trump's racist remark racist. Trump's strongest supporters said his comment was not while many of his begrudging bedfellows did not make that particular charge.

Many Republicans did not directly respond to questions regarding whether the President's comments were "racist." Instead, Sen. John Cornyn of Texas, called the comments a "mistake," and Sen. Shelley Moore Capito of West Virginia, called them "unproductive."

McConnell declined to comment Monday on Trump's tweets. He said he'd be "happy" to respond later in the week at his regularly scheduled news conference.

For years, Trump has made racist and anti-immigrant comments. He questioned the birthplace of the first African American president, Barack Obama. He called Mexicans "rapists" in his campaign kickoff speech in 2015. He then called for a complete ban on Muslims.

He said a federal judge could not be impartial because of his race. He expressed a preference for immigrants coming from Norway rather than Haiti. He blamed "both sides" for the violence emanating from a white-supremacist rally in Charlottesville, Virginia.

But while Trump is historically unpopular at this point in his presidency, he still maintains a great deal of support within the Republican Party. Over the past two years, the small crew of Republicans in Congress who have criticized him has gotten smaller; some have retired, left the party or lost.

So it was no surprise that some Republicans still rallied to the President. Sen. Steve Daines of Montana tweeted that he "stood with" Trump, adding an American flag emoji.

House Republican Leader Kevin McCarthy said, "The President is not a racist."

"I think this is really coming down to a battle about ideology," he added. "It's really kind of a socialist battle versus a thing that we believe within America."

Trump himself denied that what he said was racist .

When asked if he was concerned that many did, Trump replied, "It doesn't concern me because many people agree with me."

At a news conference with Ocasio-Cortez, Omar and Tlaib, Pressley referred to Trump's Twitter attacks on the four progressive Democratic congresswomen as a "disruptive distraction" and said that she would encourage the American people "to not take the bait."

"This is simply a disruption and a distraction from the callous, chaotic and corrupt culture of this administration all the way down," she said.