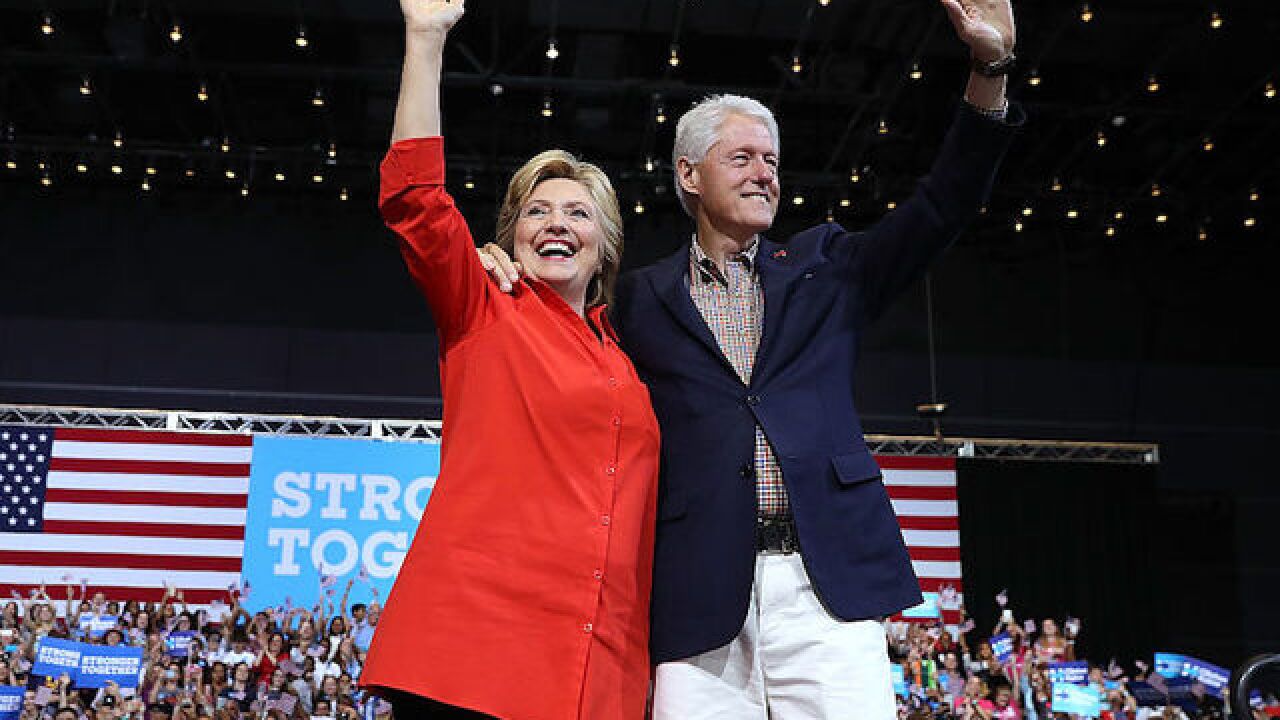 Bill and Hillary Clinton on Tuesday kicked off their paid speaking tour in Toronto, re-emerging in the national spotlight as their political legacy undergoes a public re-examination two years after the former secretary of state lost the 2016 election.

President Donald Trump hung over the 90-minute event, with the Clintons using questions on foreign policy, the 2018 midterms and climate change to slam the President before a receptive audience. The Clintons critiqued Trump's rhetoric on trade, his comments about military leaders and, notably, his handling of the murder of Saudi journalist Jamal Khashoggi in the country's consulate in Turkey.

"We have a president who is part of the cover-up as to what happened in that consulate or embassy when Mr. Khashoggi was murdered," Clinton told the audience. "And we have a president and those closest to him who have their own personal commercial interests."

Clinton went on to suggest that Trump's hesitance with confronting Saudi Arabia over Khashoggi's murder was more about his personal connections to the Kingdom, not the country's business deals.

The interview between the Clintons and Frank McKenna, the former Canadian Ambassador to the United States, was friendly and avoided sensitive subjects. The event was also not sold out. Organizers cut the Scotiabank Arena in half and blocked off the upper level, but as the show got underway there were sections of seats unoccupied.

The series, sponsored by Live Nation, is meant to bring the couple together for a question and answer with high profile figures in each of the 13 cities they visit on the months-long tour.

But the kickoff comes at a tenuous time for the Clintons: Not only is their standing in the Democratic Party in question after neither was particularly prolific during the midterms, but the event comes amid a renewed focus on Bill Clinton's affair with Monica Lewinsky, a moment in history that has gained more attention recently because of a multi-part series on the affair on A&E and other retrospectives. The Lewinsky affair and other allegations against of sexual impropriety Bill Clinton are also being re-examined in the light of the #MeToo era.

Some Democrats, too, have questioned why Clinton remains in the political spotlight after her loss, criticism that the former secretary of state has called "ridiculous."

Hillary Clinton was not asked about these questions during the event. But McKenna did ask the 2016 candidate whether she was considering running for president in 2020.

"Actually, Frank," she said with a smile, "I am thinking about standing for Parliament here in Canada."

All eyes on Trump

The event made clear that the Clintons are still keenly focused on the day-to-day machinations of the Trump administration, keeping up with the President's statements and frequent interviews.

"It just absolutely dumbfounds me," Hillary Clinton said about Trump's attacks against Admiral William McRaven, the architect of the raid that killed Osama Bin Laden. "I have never, ever imagined that you would have a president personally attacking people who have put their lives on the line year after year after year."

And the former secretary of state was prepared to  mock Trump's interview with the Washington Post  just hours after it published, shaking her head at Trump telling the paper "my gut tells me more sometimes than anybody else's brain can ever tell me."

You "literally you can't make this stuff up," she said. "A dozen times a day your head is spinning."

And near the end of the event, Hillary Clinton returned to Trump's gut, criticizing him for saying he does not "believe" a recently released dire government report on climate change.

"It just riles me up," she said. "If you won't listen to people who actually spend time over decades studying problems, my goodness, your gut is not the answer to everything that is important in the world, I'm sorry."

The tour will net the Clinton's a substantial payday -- tickets in Toronto are running CA $53 and CA $434 and are pricier in other stops -- but those close to the Clintons argue that the tour is also meant to refute claims that the couple is losing popularity and should stay on the sidelines of American politics after Hillary Clinton lost the 2016 presidential election.

"People can say they should go away, but they just sold north of 3 million books this year. People can say that, but if people didn't like them, they wouldn't be buying their books," said one adviser. "I think it's fair to point out that they continue to do things and continue to be successful at them."

But the volume of calls for the Clintons to step off the stage were louder than ever during the 2016 midterms, especially for Bill Clinton, whose affair with Lewinsky and other accusations of impropriety have gained a renewed examination amid a public reckoning and national conversation about the treatment of women in the workplace.

And even Democrats loyal to the Clintons are questioning the decision to embark on the tour.

"I just think the optics of going to an event where people are paying to see them, and they are financially gaining from this, I am not sure that is the right way to reingratiate them back into the public sphere," said a former Clinton aide. "They haven't gone away, and I don't want them to go away, but I am not sure this is the right venue from an optics standpoint."

'We have been dissected, psychoanalyzed'

The interview was far from personal until the last question, when McKenna asked Bill Clinton to reflect on his marriage to Hillary Clinton and when they met decades ago as law students at Yale University. The question, while soft, evoked thoughts about how their marriage has been tested, most notably by the President's affair with then-White House intern Lewinsky.

Since stepping back into the public eye in 2014 with a piece for Vanity Fair, Lewinsky has talked about how her view of her affair with the President has changed in nearly two decades. Lewinsky recently wrote that she sat down for the interview with A&E to ensure that her experience "never happens to another young person in our country again."

"An important part of moving forward is excavating, often painfully, what has gone before. ...That's exactly where we need to start to heal -- with the past. But it's not easy," she wrote.

While Lewinsky did not come up during the event, Bill Clinton did make a passing reference to the focus that has been on his marriage for years.

"We have been dissected, psychoanalyzed, cut open and down but it has been the most interesting thing you can possibly imagine. It is still interesting to me. And wonderful," he said about his marriage.

Both recalled how their first date was to an exhibit at Yale University by Mark Rothko. The museum, Hillary Clinton said, was closed because of a strike, but Bill Clinton convinced a janitor to let them in anyway.

"It was my first opportunity to watch him negotiate in action," she said. "In we went, and we had an incredible afternoon and yeah, the rest, they say, is history."

The former President jumped in.

"Every time I see a Rothko, I go look at it and salute old Mark," he said. "And thank him."