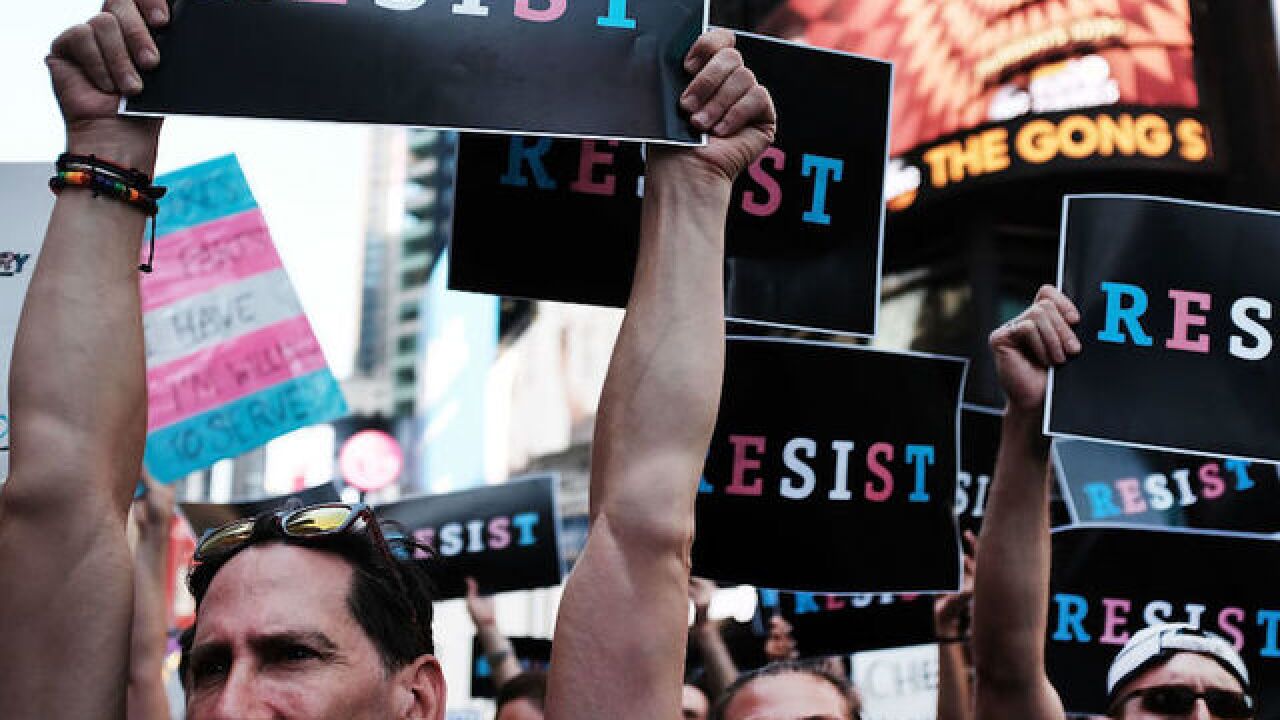 Image copyright 2017 Getty Images. All rights reserved. This material may not be published, broadcast, rewritten, or redistributed.
Spencer Platt
<p>Dozens of protesters gather in Times Square near a military recruitment center to show their anger at President Donald Trump's decision to reinstate a ban on transgender individuals from serving in the military on July 26, 2017 in New York City.</p>

In yet another aggressive attempt to bypass federal appeals courts, the Trump administration asked the Supreme Court on Friday to hear a challenge to President Donald Trump's policy that bars most transgender individuals from military service.

The policy, first announced by the President in July 2017 via Twitter and later officially released by Secretary of Defense James Mattis, blocks individuals who suffer from a condition known as gender dysphoria from serving with limited exceptions. It also specifies that individuals without the condition can serve but only if they do so according to the sex they were assigned at birth.

District courts across the country have so far blocked the policy from going into effect. The 9th Circuit Court of Appeals heard arguments in one challenge earlier this fall and the DC Circuit will hear arguments in early December.

On Friday, Solicitor General Noel Francisco filed petitions asking the justices to take up the issue in three separate cases that are still in lower courts so it could be decided definitively this term. Francisco argues that lower court rulings imposing nationwide injunctions are wrong and warrant immediate review.

He writes because of the injunctions, "the military has been forced to maintain that prior policy for nearly a year" despite a determination by Mattis and a panel of experts that the "prior policy, adopted by (Defense Secretary Ash Carter), posed too great a risk to military effectiveness and lethality."

"The President's ban is a cruel and arbitrary decision designed to humiliate transgender Americans who have stepped forward to serve our country," she added. "This bigoted ban weakens our military readiness and our country, and shows this president's stunning lack of loyalty to those who risk all to defend our freedoms."

Earlier in the month, the Department of Justice warned the 9th Circuit Court of Appeals that it planned to ask for emergency relief to lift the nationwide injunction.

The filing comes after Chief Justice John Roberts and Trump got into a public dispute about the independence of the judiciary this week. Roberts issued a rare statement on Wednesday criticizing the President for calling one lower court judge who ruled against him an "Obama judge." The President responded via Twitter criticizing Roberts and accusing the American judiciary of undermining national security.

Under normal circumstances, the Supreme Court does not like to take up an issue before it has made its way through the lower courts. The justices like to have issues percolate below so that they can benefit from the opinions of lower court judges.

Francisco has moved aggressively at times to get cases before a Supreme Court that is more solidly conservative with the addition of Justice Brett Kavanaugh.

Francisco asked the justices to step in to review the lower court's decision in a case related to the addition of a citizenship question to the 2020 Census. He also asked them to review an adverse lower court opinion blocking the proposed phase-out of the Deferred Action for Childhood Arrivals program.