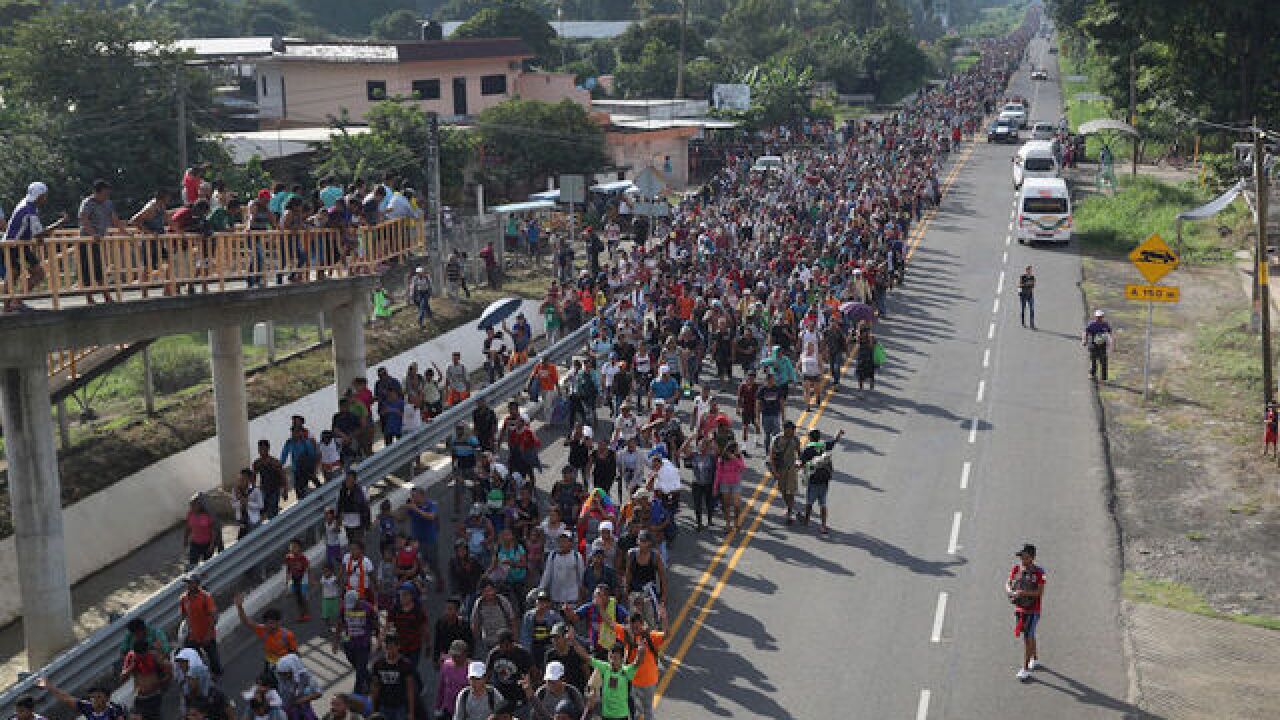 Image copyright 2018 Getty Images. All rights reserved. This material may not be published, broadcast, rewritten, or redistributed.
John Moore
<p> October 21, 2018 in Ciudad Hidalgo, Mexico: The caravan of thousands of Central Americans, mostly from Honduras, plans to eventually reach the United States. U.S. President Donald Trump has threatened to cancel the recent trade deal with Mexico and withhold aid to Central American countries if the caravan isn't stopped before reaching the U.S.</p>

President Trump is thinking about using  a travel ban-like executive order  to keep a  migrant caravan  that's working its way through Mexico out of the US.

The proposal, according to the  San Francisco Chronicle , would block certain asylum-seekers at the Mexican border and represent a dramatic escalation of enforcement. This plan is just in the formative stages, though, and a government official familiar with the working version told the Chronicle it would probably face legal challenges.

In the meantime,  another US-bound immigrant caravan  plans to leave next week from El Salvador. Among the travelers likely are pregnant women, who as immigrants  face particular stresses  in America.

PHOTOS:  Scenes from the migrant caravan heading to U.S .

Homeland Security Secretary Kirstjen Nielsen, referring to US troops  who are expected to be deployed  to the southern border to deter an incoming migrant caravan, said Thursday that "we do not have any intention right now to shoot at people."

"We do not have any intention right now to shoot at people, but they will be apprehended, however," Nielsen said in an interview with Fox News. "But I also take my officers and agents, their own personal safety, extraordinarily seriously. They do have the ability, of course, to defend themselves."

Defense Secretary James Mattis is expected to sign  deployment orders  that could send 800 or more troops to the border with Mexico to help border patrol authorities stop the caravan, according to three administration officials.

Nielsen said the Department of Homeland Security has asked for the Department of Defense to help "bolster our capabilities" on the border in an effort to avoid a  chaotic incident  like when migrants were met at the Guatemalan-Mexican border by Mexican police in riot gear.

"We will absolutely not tolerate violence against border patrol in this situation," Nielsen said. "These are dedicated men and women risking their lives every day. I will not tolerate Mexicans or anybody else acting in a violent way towards our men and women on the border."