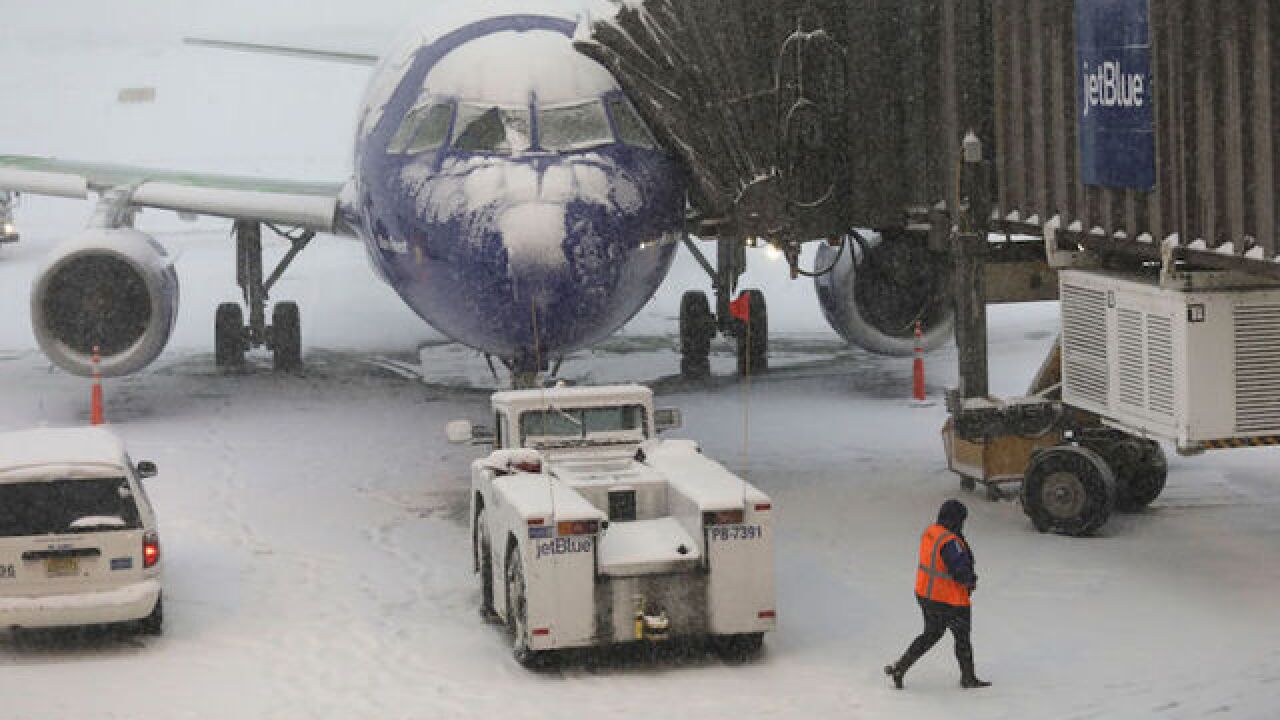 Image copyright 2018 Getty Images. All rights reserved. This material may not be published, broadcast, rewritten, or redistributed.
John Moore
<p>A ground crew member walks past a cancelled flight due to a snow storm at the Newark Liberty International Airport on November 15, 2018 in Newark, New Jersey. </p>

A winter storm that caused Thanksgiving travel chaos will bring more high winds and snow Monday as it pushes northeast from the Midwest toward the lower Great Lakes.

More than 1,000 flights were already canceled early Monday and more than 10 million people are under a blizzard warning due to the wintry conditions.

Kansas Gov. Jeff Colyer issued a state of emergency declaration for the state and officials said road conditions were "treacherous" in some areas.

"We strongly recommend that you postpone travel plans, if possible; however, if you must be on the road, make sure your vehicle's emergency kit is stocked, your gas tank is full and your cell phone and charger are with you and someone knows your travel plans," the declaration reads.

Kansas City International Airport was closed to flights arriving on the airfield due to low visibility caused by weather conditions but reopened Sunday evening, according to its Twitter account.

More than 1,700 US flights were canceled Sunday, with delays to 5,091 flights, according to flight-tracking website FlightAware. Most were at Kansas City and Chicago's O'Hare International and Midway airports.

Multiple roads were also closed because of whiteout conditions, according to the KanDrive website. The Kansas Department of Transportation tweeted late Sunday that Interstate 70 had reopened statewide but that there could be morning delays, with ice and wind blowing snow over just cleared highways.

There were reports of snow as high as 16 inches in parts of Iowa, with other areas reporting 3 inches to 10 inches. Baileyville, Kansas, notched 10 inches and 7 inches fell in Salina, Kansas.

The weather system was forecast to move into the Great Lakes region before hitting the Northeast on Monday, according to CNN meteorologist Haley Brink.

More than 10 million people are under a blizzard warning.

Nearly 20 million people were under a high-wind advisory. This includes residents of Kansas and some in parts of Missouri, Nebraska and Iowa. Wind reports from the Central Plains clocked wind gusts at tropical storm force from 50 to 75 mph from Nebraska to Texas.

Fort Hays State University student Brooks Barber captured the blizzard conditions in Hays, Kansas, on Sunday morning. Streets were dark, and many were without power, he said.

The National Weather Service Quad Cities office posted a video of a weather balloon being released in a blizzard.

Whiteout conditions brought low visibility to the small town of Chariton, Iowa, which is an hour south of Des Moines.

By Monday morning, many areas from the Plains to the Midwest will have seen 6 to 10 inches of snow, CNN meteorologist Michael Guy said. As the low pressure passes, areas behind the system will continue to see more snow through Monday evening with up to a foot possible before the skies clear.

The storm is moving to the lower Great Lakes, making its way toward New England by Tuesday. Parts of Michigan, the eastern shores of Lake Erie, as well Maine could see up to a foot or more of snow before the storm exits the US by Wednesday morning, Guy said.

The major metropolitan areas in the Northeast will see wind and rain Monday into Tuesday. Wind gusts from 30 mph to 45 mph are possible as the system passes and temperatures drop through midweek.