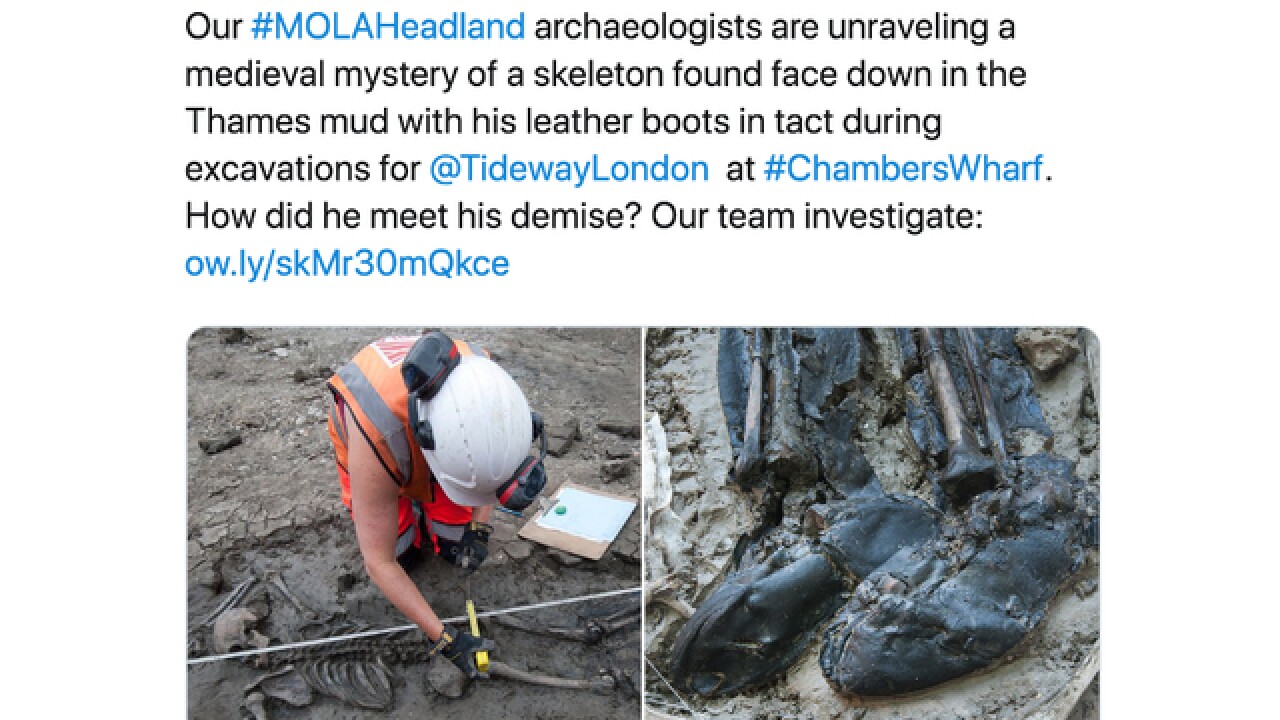 Copyright 2018 Scripps Media, Inc. All rights reserved. This material may not be published, broadcast, rewritten, or redistributed.
MOLA Archaeology/Twitter
<p>The skeleton of a man, dating back around 500 years, has been discovered face down in the mud under London's River Thames, with his thigh-high leather footwear remaining virtually intact.</p> 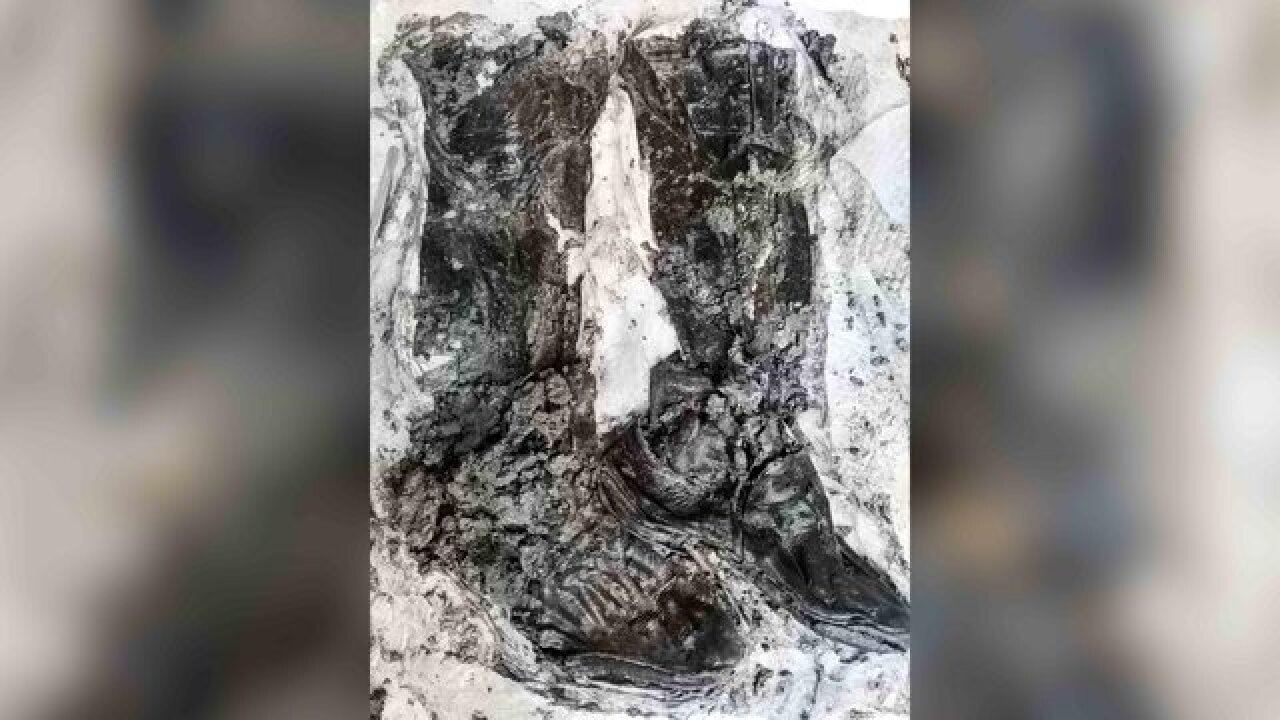 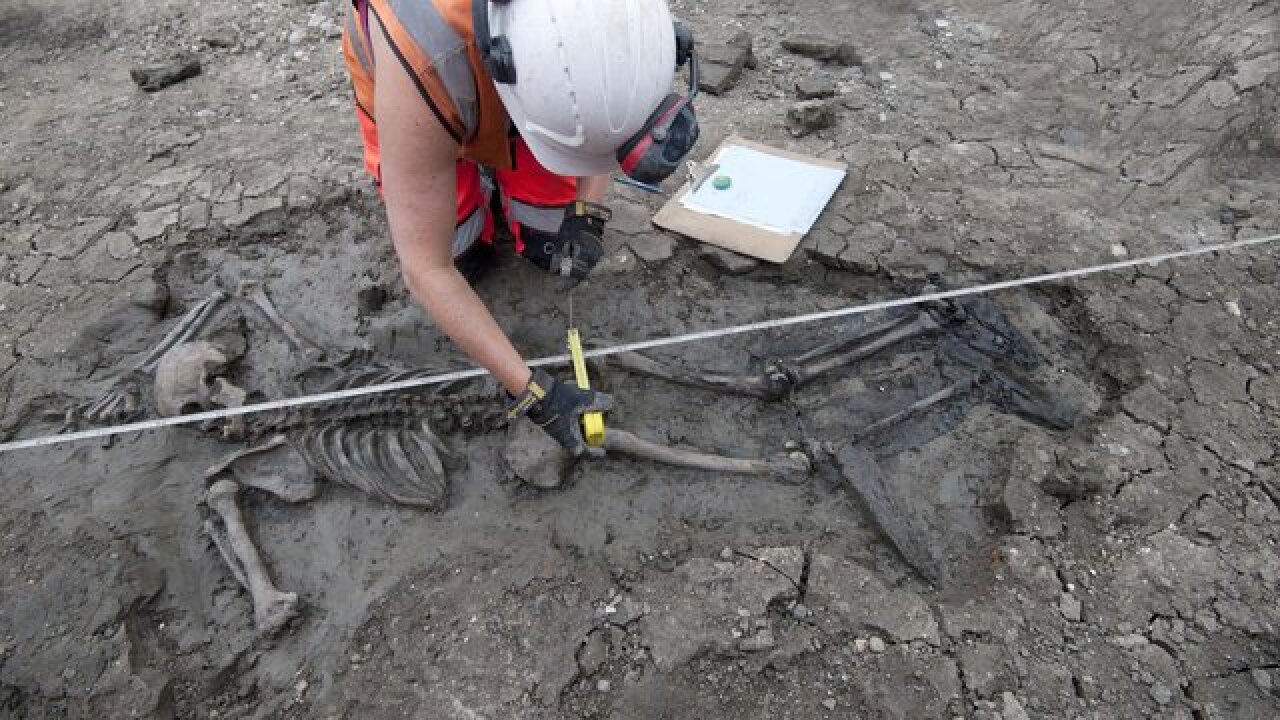 A pair of durable boots is a must-have in anyone's winter wardrobe -- and a team of archaeologists has found a timeless pair in a very unlikely place.

The skeleton of a man, dating back around 500 years, has been discovered face down in the mud under London's River Thames, with his thigh-high leather footwear remaining virtually intact.

The find was made in Bermondsey, south London, by archaeologist working on London's new "super sewer," a £4.2 billion ($5.4 billion) tunnel that will capture, store and transfer raw sewage and rainwater that currently overflows into the river. The mystery of the man's sturdy (and sought after) footwear has prompted the team to investigate further.

Leather was an expensive commodity in Tudor times, and it is unlikely someone would be buried wearing such a highly prized item, according to MOLA Headland, the firm leading the project -- meaning the man's demise was likely premature.

But the company notes that the banks of the Thames were a hazardous place in the late 15th and early 16th century, to which the skeleton has been dated.

He may have been "a fisherman, a mudlark or perhaps a sailor," the archaeologists speculated.

"By studying the boots we've been able to gain a fascinating glimpse into the daily life of a man who lived as many as 500 years ago," said Beth Richardson, Finds Specialist at MOLA Headland.

"They have helped us to better understand how he may have made his living in hazardous and difficult conditions, but also how he may have died. It has been a privilege to be able to study something so rare and so personal," Richardson added.

The boots were built with extra soles and stuffed with moss or a similar material to help them last in tough terrain, according to the firm's conservation experts.

Investigation of the man's bones has also provided further clues to the mystery.

He was likely to have died under the age of 35 and had deep groves in his teeth most likely caused "by a repetitive action, like passing rope between his teeth as a fisherman might," according to the company.

Our #MOLAHeadland archaeologists are unraveling a medieval mystery of a skeleton found face down in the Thames mud with his leather boots in tact during excavations for @TidewayLondon at #ChambersWharf. How did he meet his demise? Our team investigate: https://t.co/Gpm5UDukdQ pic.twitter.com/6yloKzLDjE