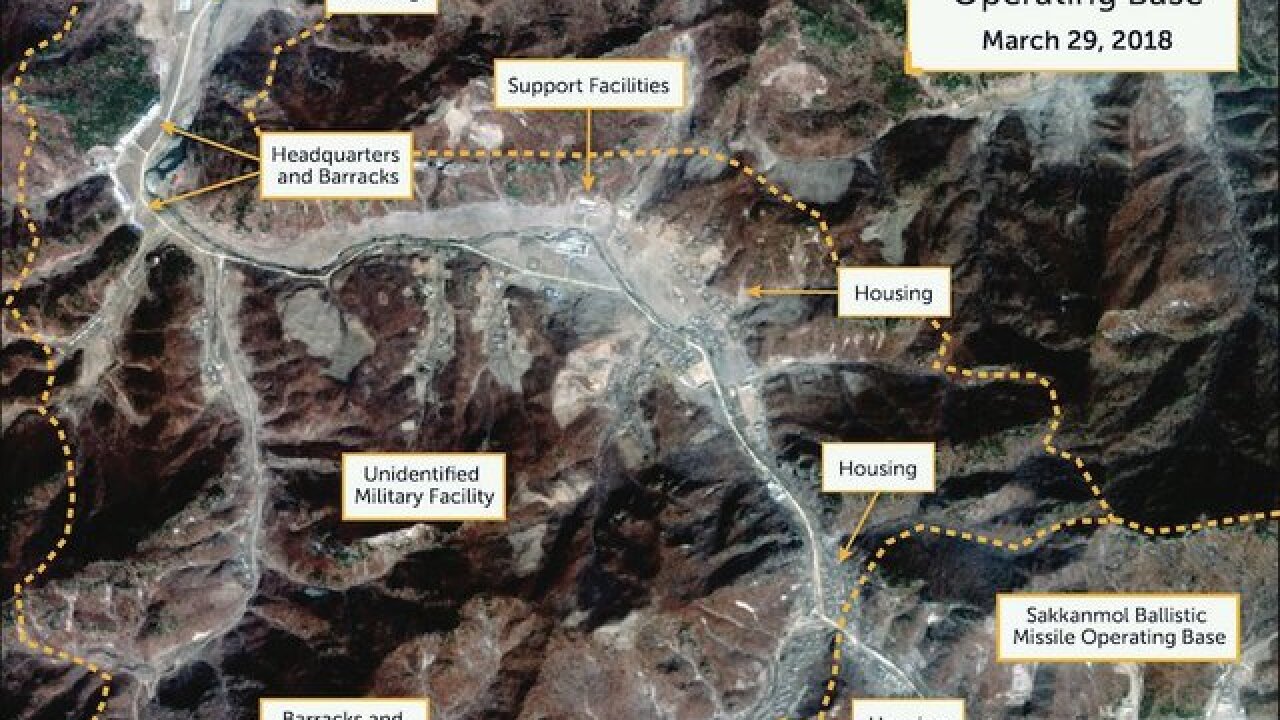 New commercial satellite images released Monday have identified more than a dozen undeclared North Korean missile operating bases, another sign that Pyongyang is continuing to move forward with its ballistic missile program amid indications that talks with the US have stalled in recent months.

While the network of undeclared sites has long been known to American intelligence agencies, it has not been publicly acknowledged by President Donald Trump, who asserted that North Korea was "no longer a nuclear threat" following his June summit with dictator Kim Jong Un.

The CIA declined to comment on the images, but US officials have expressed concern about North Korea using hidden and undeclared locations to continue to work on improving their missile technology and possibly their nuclear program.

The new images, first reported by The New York Times, show researchers at the Beyond Parallel program at the Center for Strategic and International Studies have identified 13 of an estimated 20 hidden missile operating bases unreported by the North Korean government.

"These missile operating bases, which can be used for all classes of ballistic missile from short-range ballistic missile (SRBM) up to and including intercontinental ballistic missile (ICBM), would presumably have to be subject to declaration, verification, and dismantlement in any final and fully verifiable denuclearization deal," the report states.

US intelligence has long assessed that the North Koreans have stored much of their weapons capability, including mobile missile launchers, in underground mountain bunkers.

Specifically, the images focus on the Sakkanmol missile base, which "currently houses a unit equipped with short-range ballistic missiles but could easily accommodate more capable medium-range ballistic warheads."

"Despite the difference in interpretation between the US government and the North Koreans over what these declarations have meant, the Singapore declaration and the new Korean declaration, for North Korea watchers it has been pretty clear that the North has not been willing to give up its entire nuclear program," Lisa Collins a fellow with the Korea Chair at CSIS and one of the authors of the report, told CNN.

However, an official with South Korea's Blue House called the report "nothing new" and told media Tuesday "the United States and South Korean intelligence service hold more detailed information using the military satellites," and that nuclear sites couldn't be "undeclared" as there had been no agreement with North Korea to declare them.

The official went on to say that North Korea had not previously pledged to close the Sakkanmol Missile Base, the focus of CSIS's report, saying, "There had been no treaty or negotiation that mandated closing the missile base."

Monday's report comes days after Trump told reporters his administration is "very happy with how it's going with North Korea" despite the administration's announcement, in the middle of the night as last week's midterm elections results were coming in, that Secretary of State Mike Pompeo's meeting with a key aide to North Korean leader Kim Jong Un had been postponed.

Trump has conveyed a starkly different image than the one painted by US military officials, foreign diplomats and sources familiar with developments who told CNN that the Democratic People's Republic of Korea is "really angry" about the US refusal to offer sanctions relief and that personal friction between US and North Korean negotiators may be slowing progress.

A source familiar with the ongoing dance between officials in Washington and Pyongyang previously told CNN that North Korea's stance is that the US "must make a move before we make the next one."

But the US appears unwilling to oblige, at the moment, according to a US official, who said the Trump administration wants to move away from the "tit-for-tat" approach of the past.

"There has been a move away from past administrations' approach to North Korea in terms of 'we will give you a little here if you give us a little there' ... kind of a tit-for-tat piece. ... We haven't seen that work in the past, so the President is insistent on holding the full pressure campaign until he gets the full denuclearization," a US official told CNN.

North Korea has often argued it is unable to provide comprehensive details about the locations of its nuclear and missile sites because that could serve as a target list should the situation escalate into an armed conflict. But Collins said that the hope is that "this type of analysis and data would help to push forward the negotiations rather than cause more blockage."

"It would actually get rid of one of the primary excuses or reasons why North Korea has not produced a list," she said, adding that "open source and independent data" can help the process as US officials might be wary of publicly disclosing information that they believe could compromise sources and methods.

When asked about Monday's new report, a State Department spokesperson implored Kim to "follow through on his commitments -- including complete denuclearization and the elimination of ballistic missile programs."

"President Trump has made clear that should Chairman Kim follow through on his commitments — including complete denuclearization and the elimination of ballistic missile programs — a much brighter future lies ahead for North Korea and its people," the spokesperson told CNN.

But experts point out that Kim has not offered to stop producing ballistic missiles, let alone unilaterally give them up, and said on New Year's Day that he would continue to mass-produce ballistic missiles and deploy those that have already been tested.

Former Secretary of Defense Chuck Hagel said Monday that the images once again show that Trump's comments on North Korea have been a "fabrication."

"The North Koreans have not signed any document working out, laying out, what steps they are going to take to denuclearize," Hagel said. "There has been nothing stated, agreed to, framed signed, except what President Trump says they've said ... but now ... we have a whole different story, and it is the reality, it is not fantasy," he added.

Vipin Narang, an associate professor of political science at the Massachusetts Institute of Technology who studies nuclear proliferation, told CNN that Kim's actions do not amount to "deception since he said on New Year's Day that North Korea would mass-produce and deploy its missiles that it already tested."

Narang added that the images released Monday identify "operating bases which, until and unless there is a deal, Kim can't eliminate without undermining his security."

Asked about the State Department's response to Monday's report, Narang called the assertion that North Korea has committed to eliminating its ballistic missile programs is "misleading."

"There has been no agreement or discussion remotely that detailed --- even on nuclear systems, and many of these are short range conventional missiles which North Korea has never said were on the table," he told CNN.

Jeffrey Lewis, an arms control expert at the Middlebury Institute of International Studies, told CNN that experts have known about these sites for years, and it is no surprise that they remain operational given Kim's declaration in January that North Korea would shift from research and development to the mass-production of nuclear systems.

Sakkanmol missile base is one of the facilities where North Korea deploys its mass produced systems, he said.

Still, Trump has sought to convey the image that progress continues to be made and teased a possible second summit with Kim in the near future.

While North Korea claims that it has taken some steps toward denuclearization, experts say those moves are largely cosmetic and easily reversible. Kim's regime has shuttered a missile engine testing facility; destroyed the entrances to its nuclear test site; and promised to close the Yongbyon nuclear facility, where North Korea is believed to produce fissile material for nuclear weapons, if Washington takes what it calls "corresponding measures."

But while that step attracted significant media attention at the time, Monday's report states that the dismantling of the Sohae facility "obscures the military threat to US forces and South Korea from this and other undeclared ballistic missile bases."

Collins told CNN that she believes one reason North Korea canceled the latest round of talks with Pompeo is because they might be targeting "the very top levels of negotiations" -- another meeting between Trump and Kim.

However, she also warned that "you can't get anywhere without these working-level talks because that's where the nitty-gritty stuff happens."

"You can't get a verifiable list of anything unless nuclear weapons experts are part of the process," she said. "Is President Trump going to create a list of all those facilities? Does he even know where some of these places are? I would be very skeptical."

"There have to be working-level talks, but the North Koreans are clearly targeting a big package deal, for them, which can only happen if President Trump is there to make the decision," Collins added. "But I think the US has been very cautious and careful to keep the negotiations moving forward at the working level and try not to have President Trump jump every time there is an offer."