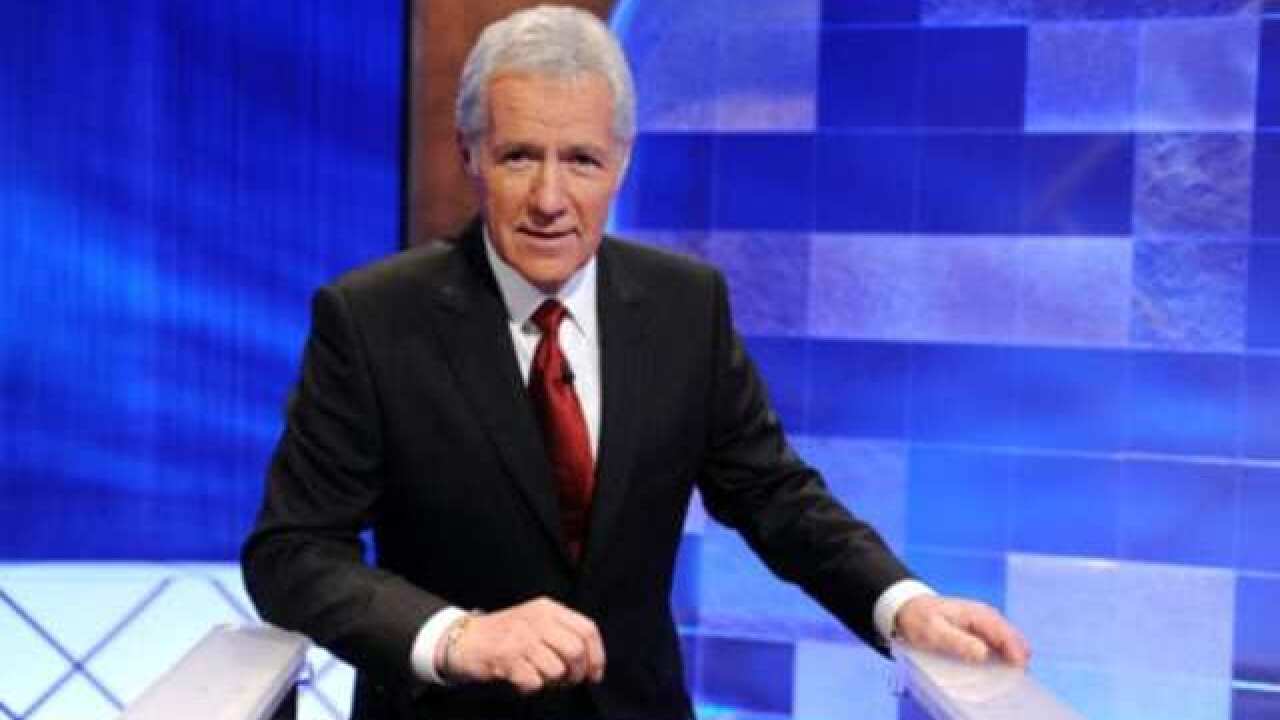 Now in its 35th season, “Jeopardy!” is one of the most popular game shows on television, with 34 Daytime Emmy Awards under its belt. Every night since its inception, millions of Americans have sat glued to their TV sets, blurting out answers to clues that host Alex Trebek gives to the contestants. The high-intensity game really challenges your knowledge of history and current events in a fun, competitive way.

But what goes on behind the scenes of “Jeopardy!”? You might be surprised.

A Lot Of People Want To Be On ‘Jeopardy!’

The “Jeopardy!” applicant pool is huge. Hundreds of thousands of people take the online “Jeopardy!” test each year to see if they qualify to be a contestant. The most recent test attracted about 80,000 applicants, according to the Detroit Free Press.

The Online Test Can Be Nerve-Wracking

Quick thinking is important when you’re taking the online “Jeopardy!” test. That’s because applicants only have 15 seconds to answer each question. Luckily, though, alternate responses, acceptable misspellings and phonetic spellings are taken into consideration.wuestenigel

Only A Few Thousand Move On To The Next Round

Producers only select about 3,000 people from that initial pool of applicants to audition in different cities across the country to appear on the show. That’s less than 4 percent of total applicants who’ve taken the online test. And you won’t know if you passed the test until you’re invited to audition.

May The Odds Be Ever In Your Favor

The number of people chosen to appear on “Jeopardy!” is winnowed down even more after the second round. After a series of tests, producers narrow down the contestant pool to 400 people who will actually compete on “Jeopardy!” that season, according to The Mary Sue. That’s a 0.5 percent acceptance rate, overall.

Just How Hard Is It To Land A Spot On ‘Jeopardy!’?

Let’s just say the selection process is intense. Producers spend weeks reviewing the 3,000 applicants they chose to move on to the second round. In addition to a one-on-one interview, candidates have to take a written quiz of 50 “Jeopardy!” questions in 15 minutes, as well as participate in a live round of “Jeopardy!” with actual buzzers. Excel during the second round and you’ll be chosen to be among the 400 contestants.

But Not Everyone Is Eligible To Try Out

People who want to try out for “Jeopardy!” must meet the minimum eligibility requirements, in addition to passing the online test. You’re ineligible to apply if you’ve appeared on any version of the show with Trebek or on any nationally-syndicated game show of any format in the past year. You’ll also be turned away if you’ve been employed by, are related to or know anyone who works for Sony Pictures, CBS, Quadra Productions, Inc., “Jeopardy!” or “Wheel of Fortune” prize suppliers, or any television or radio station broadcasting either game show.

Applicants for the “Jeopardy!” Teen Tournament and College Championship are exempt from the 18-and-over age requirement. But they do have to meet specific criteria. Teenagers must be between 13 and 17 years old at the time of taping, while applicants for the College Championship must be enrolled full-time in an undergraduate program with no previous bachelor’s degrees.

Be Prepared To Tell Your Life Story

According to BuzzFeed, applicants have to fill out a huge form with personal information [This is a list, but from a former contestant. Would that count?] before they even audition. On this form is where potential contestants provide their “fun facts” — like how you met your partner or that one time you got lost in Prague — that the producers will ask about during the formal audition. And if you’re chosen as a contestant, you’ll have to remember all of those facts for the interview portion of the show.

Trebek and the “Jeopardy!” team tape five episodes per day over a 46-day period. That’s around 230 episodes in one season. “Jeopardy!” has aired over 7,000 episodes since its inception.

Trebek has held the same tape-day schedule for more than 30 years. The “Jeopardy!” host starts his day at 6 a.m., signing autograph requests and reading viewer mail, and begins taping the first episode of the day at 11:30 a.m. His day ends at 4:15 p.m. after the last taping of the day wraps.

But What About The Clothing?

Trebek changes his suit for each taping so that each episode can seem like a new day. But the “Jeopardy!” host is not the only one who’s subject to a wardrobe change. The returning champion also has to change their clothes for the next taping, which means each contestant has to bring a second outfit with them.

During the second round of the “Jeopardy!” selection process, candidates get a chance to practice their buzzer skills. And practice is important — really important. Contestants have to wait for Trebek to finish the clue before they can buzz in. If they buzz in too early, they’re locked out for a few seconds.

“It’s about reflexes, not speed,” Ken Jennings, who holds the record for the longest “Jeopardy!” winning streak, told Cracked. “You have to buzz at the exact second the buzzer goes live.“

There’s A Reason Why The Handwriting Is Awful

A “Jeopardy!” contestant with clear penmanship is a rarity — and there’s a reason for that. People competing on “Jeopardy!” have to write their final answer on a small screen using a large stylus pen. “It’s like writing with an icicle on glass,” Jennings told Cracked.

Contestants are bound to spell their answers wrong and, sometimes, those answers are still acceptable. In other cases, not so much — and that can lead to controversy. During a Kids Week episode in 2013, 12-year-old Thomas Hurley lost $3,000 after he spelled “emancipation” with an extra T, although his actual answer was correct. Outrage erupted over social media, with “Jeopardy!” fans complaining about the decision on the show’s Facebook page.

What you say is just as important as how you say it. In March 2012, contestant Reid Rogers was docked $800 after he pronounced “Wimbledon,” the famous tennis courts in England, as “Wimble-TON.” Trebek didn’t notice the mispronunciation at first but informed the audience later in the episode that Rogers would lose some cash because he pronounced the word incorrectly.

Think You’re Smarter Than A Robot?

In 2011, Jennings and fellow “Jeopardy!” winner Brad Rutter, who holds the record as the show’s mega-champion, took on Watson, an IBM supercomputer, in a three-day “Jeopardy!” battle. The two “Jeopardy!” contestants gave the robot a run for his money but, ultimately, Watson won by a landslide. After Watson’s victory, some viewers accused “Jeopardy!” of rigging the game so that IBM’s AI platform would beat the human champions.

“Jeopardy!” winners walk with their earnings from the show, minus taxes. Second- and third-place contestants, on the other hand, only take home $2,000 and $1,000, respectively, in cash winnings. Before 2002, though, they were given consolation prizes, such as vacation packages or promotional merchandise.

But Don’t Expect The Cash Winnings Right Away

Winning “Jeopardy!” contestants don’t receive their cash prize as soon as they walk off the set. According to Marketplace, it can take between three to five months for a winner to receive their prize. Why the wait? The “Jeopardy!” prize department needs to verify the winner’s identity, Marketplace reported.

Ever wonder why Trebek seems to jot down notes after he reads a clue? It’s actually a part of his hosting strategy. The “Jeopardy!” host crosses off each clue so that he doesn’t re-read one by mistake.

‘Jeopardy!’ Has A Clue Team That Travels The Globe

Reporters — known as the “Jeopardy!” Clue Club — make up the game show’s video clue team. They travel the globe to record video clues for each episode. So far, the Clue Club has visited more than 40 foreign countries and 280 cities around the world, as well as 48 of the 50 states in America.

Who Writes Those Clues, Exactly?

“Jeopardy!” has a team dedicated to researching and writing clues for each episode. That team consists of eight writers and seven researchers, according to a 2017 Vulture article about the process.

It’s not every day that people competing on “Jeopardy!” are stumped by a category. But that doesn’t mean it doesn’t happen. In fact, there are a few categories that had contestants scratching their heads.

One example: “An intersection in this provincial capital is the original western terminus of the Trans-Canada Highway.” The answer that eluded all three contestants? Victoria, British Columbia.

Shifting Between Categories Quickly? There’s A Term for That

Arthur Chu is a four-time “Jeopardy!” champ who walked away with over $100,000 in winnings. But Chu’s victory drew ire from fans because of the strategy he used on the game show in 2014: “Forrest Bouncing.”

“Forrest Bouncing,” named after 1986 Tournament of Champions winner Chuck Forrest, is the term for jumping between categories quickly, keeping other contestants on their toes. It’s a completely legal game strategy but one that some hardcore fans seem to hate.

There Can Only Be One

Shows come and go, but “Jeopardy!” lasts forever. The popular game show has spent more than 30 years on air since it was reprised. In fact, it’s outlasted over 400 other game shows.

Like many game shows, “Jeopardy!” used to give away sponsored consolation prizes. Among those gifts? Boxes of Rice-A-Roni. Suffice it to say, that’s not the case anymore.

It’s A Bit Chilly In Here

There’s one thing “Jeopardy!” fans love more than the Double Jeopardy round: Alex Trebek’s signature mustache. It’s no wonder, then, that controversy erupted when the award-winning host decided to shave off his ‘stache back in 2001. Trebek has worn facial hair in the intervening years, but most often keeps his upper lip bare.

There’s A Reason Your Toddler Loves The ‘Jeopardy!’ Theme Song

If your little one loves the theme song to “Jeopardy!” there’s a good reason why. Showrunner Merv Griffin originally wrote the tune, titled “Think,” as a lullaby for his son. Griffin initially called the song “A Time for Tony.”

The History Of ‘Jeopardy!’ Begins In The Air

It’s Griffin’s wife, Julann, who came up with the concept for “Jeopardy!” back in 1963. And where was Julann when she dreamed up the game show? In mid-air. She and her husband were flying back to New York City after visiting her parents in Michigan for the weekend, according to Smithsonian Magazine. “Jeopardy!” made its debut a year later.

“Jeopardy!” wasn’t the original name of the game show. Griffin first called it “What’s the Question?,” but scrapped the name after a network executive rejected the game concept, according to Mashable. That’s not the only thing that changed, though: “Jeopardy!” first ran on NBC from 1964 to 1975, with Art Fleming as its host, according to ThoughtCo. But it was canceled after 11 seasons. CBS wouldn’t pick up the game show until 1984, at which point they completely transformed the format and brought Trebek on-board.

‘Weird Al’ Yankovic May Have The Midas Touch

“Weird Al” Yankovic may have breathed new life into “Jeopardy!” In December 1983, everyone’s favorite musical comic recorded the song, “I Lost On Jeopardy” and, a few months later, he performed the tune on Griffin’s talk show. That September, “Jeopardy!” came back on the air with Trebek as the host. Is Weird Al responsible for the game show’s revival? Probably not, but it’s fun to think so.