For National Pickle Day, how about a pickle pizza? 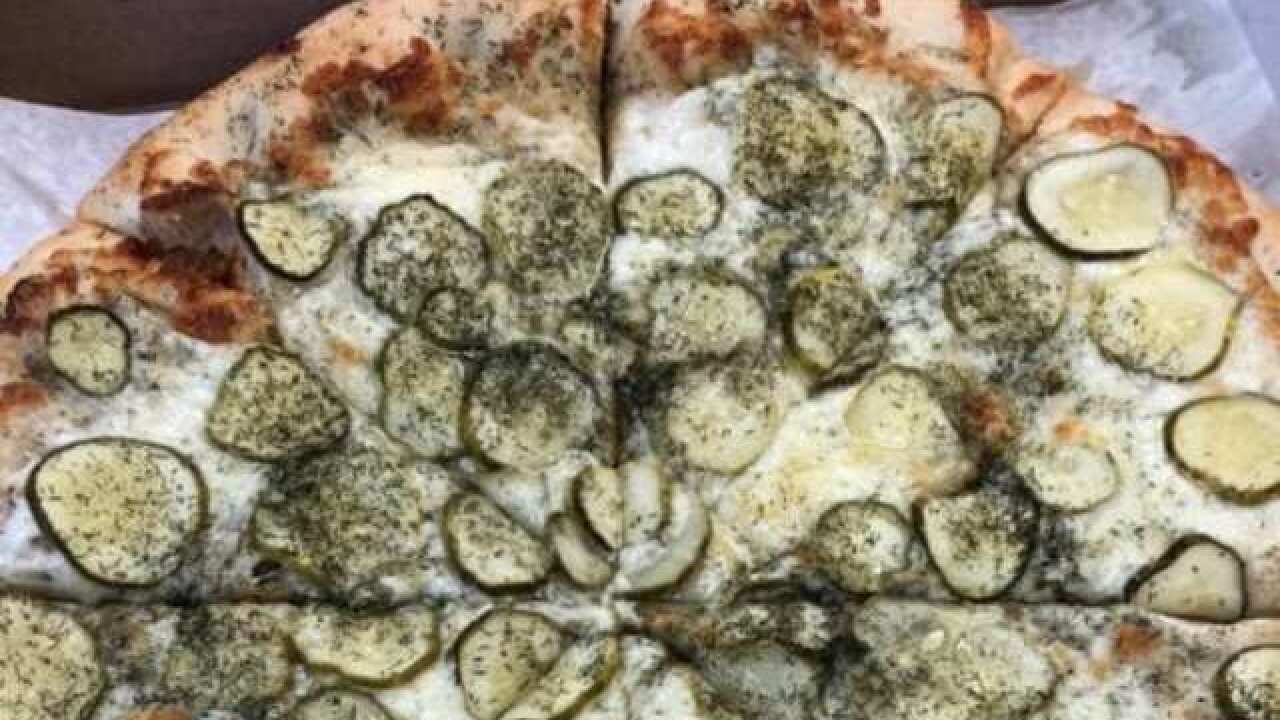 It's National Pickle Day, and there's a pizzeria in New York that is sparking a great debate online because it’s been using pickles on one of its specialty pizzas. That’s right, folks. Pickles.

People haven’t been shy about sharing their opinions about this pie at Rhino's Pizza in Webster, New York ever since a video from Insider, which showcases how the pizza is made and more, went viral. Those who are commenting online seem to either love the idea of pickles on pizza or absolutely detest it. There’s no middle ground here, because yeah, people take their pizza that seriously.

According to the Rhino’s Pizzeria menu, the pizza is made with a white garlic base in the place of traditional pizza sauce and then topped with mozzarella cheese, dill pickle slices and dill weed seasoning.

Honestly, this sounds like it’s at least worth a try, but then again, you have to make those types of decisions for yourself. Many have already formed an opinion and shared it online, but first, watch the video that started it all:

Twitter user @MHerrera13_ can’t get over how pineapples can be such a big deal, but pickles are acceptable:

Meanwhile, Twitter user @sh__eh isn’t afraid to show her love of the unconventional pizza topping, simply writing, “Pickles are so good on pizza”:

Pickles are so good on pizza

Twitter user @DaveLockbaum even went so far as to say, “it’s dillicious”:

Some are “terrified” by the idea of this pickle topping, as Twitter user @MikaylaRemer points out:

But, others are wanting to try it, despite what people say. Twitter user @morg_brennan isn’t ashamed of her need to find out if this is good or not:

I wanna try pickle pizza in the worst way

Surprising to some, pickle pizza actually isn’t the only nontraditional pizza item on the menu at Rhino’s Pizza. In fact, there’s also a pie that comes topped with chicken fingers, swiss cheese, mozzarella cheese and a ham and country sweet sauce that might be worth a try — if you’re feeling adventurous.

In case you’re curious to try this, but aren’t able to visit this NY location, here are some pickle pizza recipes that you can make at home.

This one goes out to all of the garlic lovers out there. The recipe from Apples for CJ not only calls for lots of garlic and cheese, but it’s also all you’ll need to settle the score once and for all. Pickles on pizza or no?

If you’re a little nervous about the idea of trying pickles all on their own, you could try this recipe from Baked by Rachel, which is supposed to taste like a bacon cheeseburger combined with a pizza. That way, if you hate the pickles as a topping, there’s still bacon, hamburger meat and cheese to save you: