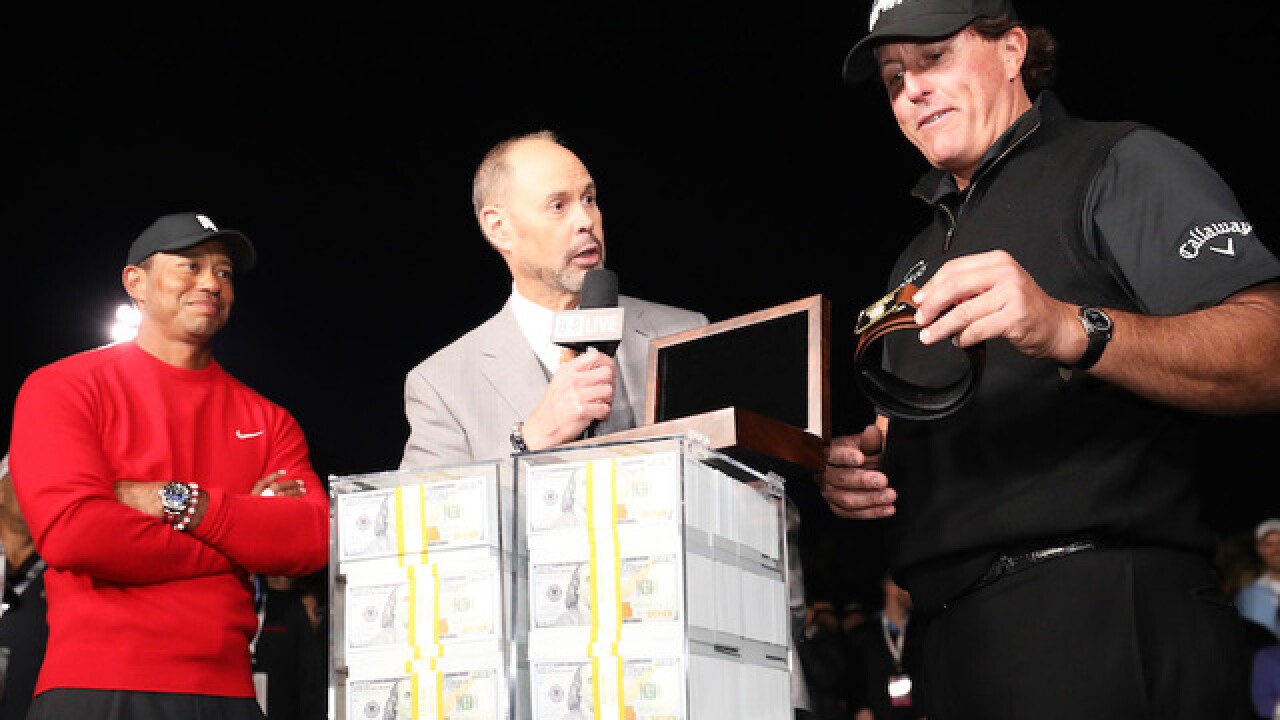 Image copyright 2018 Getty Images. All rights reserved. This material may not be published, broadcast, rewritten, or redistributed.
Christian Petersen
<p>Phil Mickelson celebrates with the winnings after defeating Tiger Woods as Ernie Johnson looks on during The Match: Tiger vs Phil at Shadow Creek Golf Course on November 23, 2018 in Las Vegas, Nevada.</p>

Tiger Woods has won more tournaments than Phil Mickelson, won more majors and -- for the past two decades -- has been golf's marquee player.

Bragging rights belong to Woods, one of the greatest golfers to ever play.

But when the two get together as old men, Mickelson will be able to recall the day -- and night -- he outlasted Woods and took home a $9 million match-play payday.

The two biggest names in men's golf over the past two decades faced off Friday for the first time in match play, with Mickelson edging his old rival Woods on the fourth extra hole.

"My heart can't take much more," Mickelson said before complimenting his opponent. "A day like today isn't going to take anything away from his greatness. He's the greatest of all time, but just to have a little bit of smack talk for the coming years means a lot to me because I really don't have much on him."

The winner-take-all, head-to-head event, at Shadow Creek Golf Course in the desert near Las Vegas, was close for all 22 holes, with neither golfer ever leading by more than one hole.

Mickelson, a three-time Masters champion, won 1-up with a last-hole birdie. Mickelson won five holes, Woods won four and they had the same score on 13 holes.

The winner was awarded a belt that Mickelson found to be too small for his waist.

Looking at to the skinnier Woods, he laughed and said, "They thought you were going to win."

It was a tight struggle

While the end was satisfying for many, the golf was, for most of the round, not. The two struggled with the greens, at one point prompting Woods to say he hadn't hit a good putt all day.

Mickelson retook the lead of the much-hyped event on the par-4 15th hole when Woods missed a par putt.

On the next hole, a long par-5, Woods, 42, missed a birdie putt that would have tied the match.

That gave Mickelson a chance to win the hole on the par-3 17th hole (there was no side-bet challenge). Mickelson hit a solid drive to the green and Woods sent his to the back edge. Tiger drilled a 21-foot chip and did his one fist-pump for the day.

"You've been doing that crap to me for 20 years. I don't know why I'm surprised now," Mickelson said after he barely missed a 10-foot putt and lost the lead.

Each player birdied the par-5 final hole of regulation; Tiger made his putt then let Mickelson pick up his ball, conceding Mickelson would make it.

They played the hole again as sunlight diminished, and Mickelson's approach shot went in a bunker. After he pitched out his third shot, Mickelson missed his long birdie putt.

Woods missed his 8-foot birdie effort that would have earned him the huge payday.

The final hole used the practice green for the tee box and course workers put in a new hole on the 18th green.

Both players parred the 93-yard hole on the first go. It took two more goes before the winner birdied under the lights.

It was thought Woods would win

Former world No.1 Woods always had the upper hand over his compatriot throughout their illustrious careers, and had won eight of his 14 majors before Mickelson clinched his first in 2004.

The pair were known to have a frosty relationship in their competitive heyday, but involvement in the US Ryder Cup task force, Presidents Cups and Mickelson's support through Woods' injuries have bonded them in recent years.

Both had long streaks without wins that ended this year.

Woods has 80 PGA Tour wins -- the second-highest of all time -- to Mickelson's 43, and had been widely expected to prevail at Shadow Creek after his remarkable return to form in 2018.