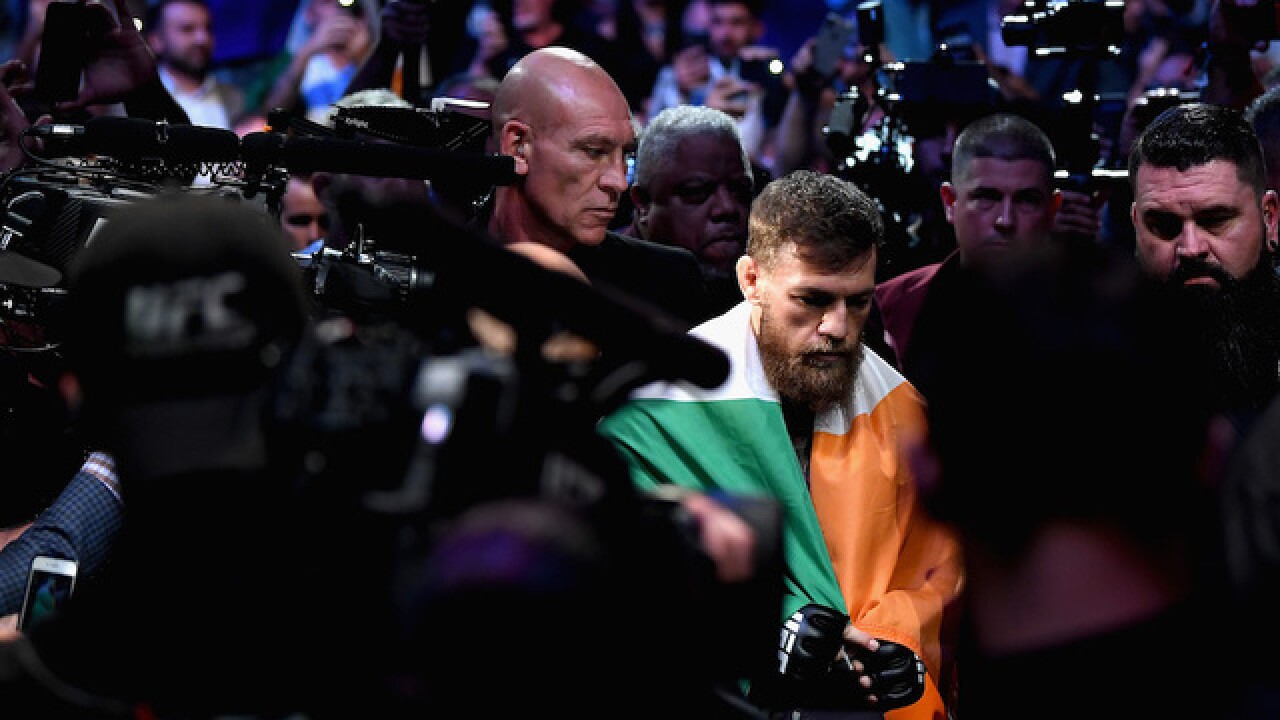 Image copyright 2018 Getty Images. All rights reserved. This material may not be published, broadcast, rewritten, or redistributed.
Harry How
<p>Conor McGregor of Ireland enters the arena before competing against Khabib Nurmagomedov of Russia in their UFC lightweight championship bout during the UFC 229 event inside T-Mobile Arena on October 6, 2018 in Las Vegas, Nevada.</p>

A much anticipated comeback to the Ultimate Fighting Championship by Conor McGregor ended in defeat Saturday, with the ugliest scenes coming after the fight.

Khabib Nurmagomedov retained both his unbeaten record (27-0) and lightweight title with a fourth round win via submission, but the headlines were made by the 30-year-old Russian going over the cage and appearing to attack someone in the crowd in the immediate aftermath of his victory.

This was followed by one of Nurmagomedov's camp seemingly entering the octagon and attacking the beaten McGregor inside the octagon. Fines and suspensions may well follow, and could mean the prospect of Khabib being stripped of the title.

The 30-year-old Irish UFC megastar McGregor had not fought since his boxing match against Floyd Mayweather in August 2017 ended in defeat .

In a sense, Saturday's bout was a case of history repeating with the same city of Las Vegas and venue -- the T-Mobile Arena -- playing host to the biggest name in UFC against the lightweight champion Nurmagomedov. But the reality is that the chaos which ensued after the fight will become the main story, rather than the Irishman's comeback to the octagon.

From the get go, both men made clear there was no love lost between them, refusing to touch gloves before the fight.

The immediate pressure came straight away from Conor, surely aware that his best chance of defeating his superior opponent -- in the eyes of the bookmakers at least -- was to dominate early in order to win the fight via stoppage (McGregor has never knocked anyone out in the UFC after the second round).

Nurmagomedov, on the other hand, was content to be patient, opting for a smothering technique. He landed by far the bigger punches in the second round, before subjecting the Irishman to his ground and pound.

The Russian also had the better of the third round, but by the fourth, both fighters were looking somewhat gassed, before Nurmagomedov's choke move forced McGregor to tap out.

Instead of the fight ending at that point however the red mist seemed to descend upon Nurmagomedov, with the Russian setting off a chain of events which will have wide-ranging ramifications.

On paper, Saturday's clash had all the makings of a classic: divisional supremacy, the evident bad blood and differing styles made for compelling elements.

The sport's best grappler in Nurmagomedov, against surely its finest striker in McGregor. Ahead of the fight, Nurmagomedov had conquered all before him, racking up a 26-0 record since coming to UFC in early 2012.

For his part, the Irishman had not fought in a UFC bout for nearly two years, since a relatively routine second-round knockout of Eddie Alvarez in November 2016.

"The Notorious" then suffered the indignity of being stripped of his featherweight and lightweight belts -- ending his reign as the only fighter to simultaneously hold two UFC titles -- due to his decision to focus on the Mayweather boxing match.

When the pair met up for the weigh-in the day before the fight, McGregor stole the headlines by aiming a kick at his opponent -- resulting in their being restrained by security guards -- while the Irishman's entourage included some showbiz star power with the sight of the Canadian rapper Drake, draped in an Irish flag. No wonder the UFC's tagline was "the world is watching."

In the immediate build-up to the fight, perhaps to play mind games -- though it was blamed on "heavy traffic" -- McGregor showed up roughly 25 minutes late to the pre-fight press conference.

But Khabib did not get rattled by his opponent's tardiness; he had already left the stage to start his weight cut. McGregor had the last word, telling reporters, "if you can't aim for peace, aim between the eyes. This is never over."

Those words may prove prophetic, but more due to his opponent's performance and behavior than McGregor's. There was certainly excitement however to justify the hype that had seen an estimated record two million pay-per-view purchases in North America alone.

That revenue will undoubtedly leave the money men keen for McGregor to return, but his lucrative career earnings make that uncertain and he was noncommittal about a future bout ahead of the fight.

But even if McGregor does not need UFC, surely UFC still needs him, perhaps more so now than ever.